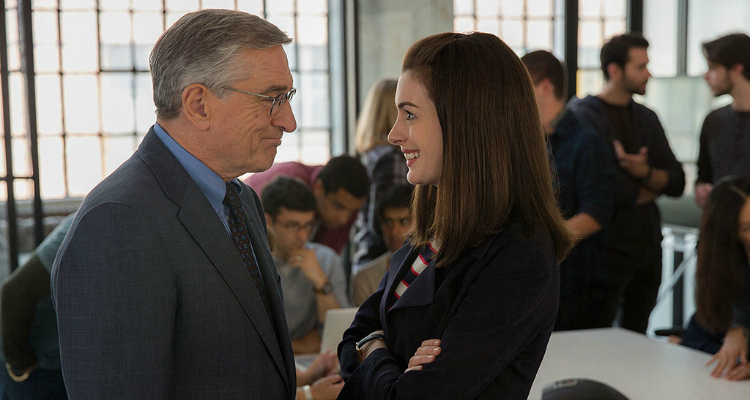 THE INTERN (USA/12A/121mins)
Directed by Nancy Meyers. Starring Robert De Niro, Anne Hathaway, Adam DeVine, Anders Holm, Nat Wolff, Rene Russo.
THE PLOT: Three years after the death of his wife, 70 year old Ben (Robert De Niro) applies to be an intern at an up and coming fashion site, which is struggling to meet the demand it has created. Initially rebuffed by the busy and slightly awkward founder Jules Ostin (Anne Hathaway), the two end up becoming unlikely friends.
THE VERDICT: THE INTERN is director Nancy Meyers’ first film since 2009’s It’s Complicated, and while Hathaway and De Niro do relatively well with the characters they are given, the film lacks any sort of tension or drama, turning what could have been a powerful film about not writing people off into a fluffy and troubling flick.
Robert De Niro is fine in the leading role, but this is one of the most insipid and lifeless characters he has played to date. From the moment the film opens with a quote about work from Sigmund Feud, until the film’s closing with Tai Chi in the park, it seems that Ben exists to be ageist against younger men, speak in inspirational quotes and be as affable and bland as possible. Anne Hathaway does slightly better in character terms with Jules, but this is a woman who rides a bike through the office and has the memory of a startled goldfish, so there is little here to make the founder of a successful website actually feel like a real person. The rest of the cast is made up of Anders Holm, Rene Russo, JoJo Kushner, Andrew Rannells, Adam DeVine and Zack Pearlman, most of whom exist just to hammer home Ben’s points about work and life – most of which is along the lines of carry a handkerchief because women cry.
Nancy Meyers’ script has all the elements for THE INTERN to be a charming and sweet film, but through some terrible dialogue, some dodgy choices and a complete lack of drama – other than some shoehorned in to create an ending – The Intern falls completely flat. As director, Meyers completely fails to make the film engaging or give it any dramatic tension, which leads to the entire shebang just meandering through the running time. As well as this, Ben reveals himself to be an ageist misogynist hiding under a layer of affability, and Jules is spineless and dull. Scenarios seem to be thrown in for the sake of being derivative, and at 121 minutes, the shine rubs off The Intern very quickly.
In all, it seems that The Intern was created to make an observation about cherishing the wisdom that older people have, but it ends up being filled with thin characters, a hatred of women, spineless women, very little drama and almost zero laughs. THE INTERN is not the film to revive the rom-com, perhaps it’s better at this stage, to just let it die with what dignity it has left.
RATING: 1/5
Review by Brogen Hayes