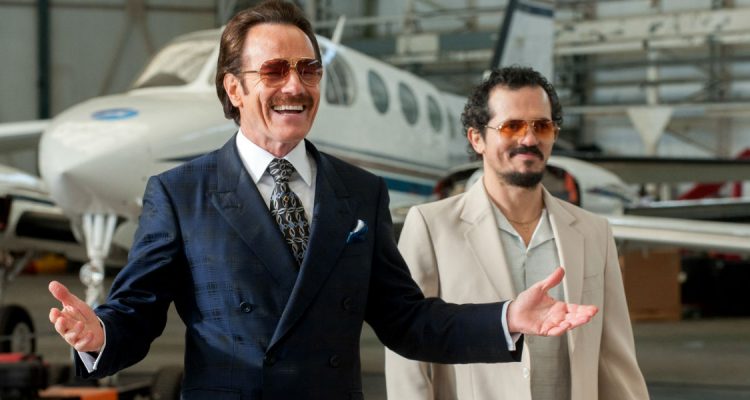 THE INFILTRATOR (USA/15A/127MINS)
Directed by Bud Furman. Starring Bryan Cranston, John Leguizamo, Diane Kruger, Daniel Mays, Tom Vaughan-Lawlor
THE PLOT: It’s 1980s America, and federal agent Robert Mazur (Cranston) is leading a double-life, being the good husband and father at home, and being pretty much whatever undercover badass creation his bosses need him to win this darn war on drugs. Shooting straight ain’t always easy, of course, especially when the drug ring you’ve worked so hard to win over gift you a fine hooker but your faithfulness to your wife means you got to create a fine fiancee. Who, in turn, the Feds have to flesh out, by putting a wide-eyed bit streetwise rookie (Kruger) on your case too.
Hoping to work his way right up through the drug chain to current kingpin Pablo Escobar – who we merely glance in a lobby – Mazur rises incredibly high through the ranks, he and his blushing bride-to-be getting up close and very personal with the Mexican crime lord’s second-in-command, Roberto Alcaino (Bratt). Have they gotten a little too close to do their job properly though…?
THE VERDICT: Taking an enormously thrilling, real-life undercover narcotics cop story and turning into a fairly thrilling, real-life undercover narcotics cop film, ‘The Infiltrator’ feels, for the most part, like The Imitator. We’ve been down in the underbelly of America’s crime lords many times before, and the distance Ted Demme’s ‘Blow’ or Mike Newell’s ‘Donnie Brasco’ are from Scorsese’s Goodfellas, well, Furman’s film is that distance again.
It’s one of those films where nothing’s actually wrong – good story, good cast, a mercifully muted John Leguizamo – but something’s not quite right. With ‘The Infiltrator’, there’s no true rush to the head here. And its two-hour running length begins to drag heavily about halfway through. So much so that you soon find yourself trying to place all the strong character actors in the support slots. “Hey, there’s that nice geezer from ‘This Is England’, the one who played Woody!”. “Oooh, Daniel Mays, from ‘Ashes To Ashes’!”. “Ah, it’s feckin’ Nidge, off ‘Love/Hate’!”.
So, file under Tuesday night, More4, 9pm.
RATING: 3/5
Review by Paul Byrne

Review by Paul Byrne
3
Not quite right