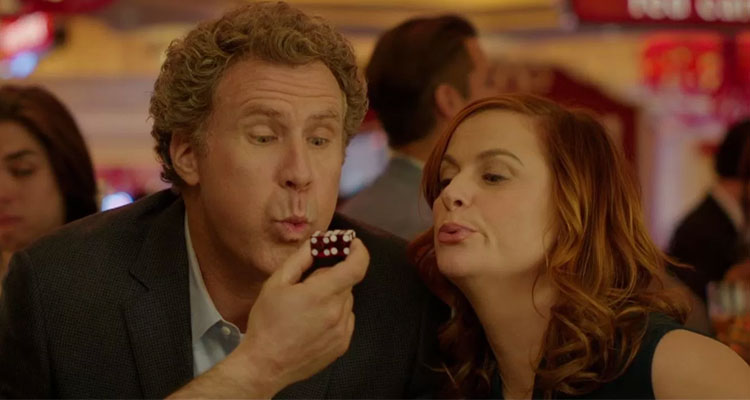 THE PLOT: When their daughter’s college scholarship is cancelled because of bureaucratic corruption, Scott (Will Ferrell) and Kate (Amy Poehler) must find a way to pull the cash together to keep their promise to their beloved daughter. After a trip to Vegas with their recently single friend Frank (Jason Mantzoukas), Scott, Kate and Frank decide to set up an illegal casino I Frank’s suburban home, as a way to make money fast.
THE VERDICT: ‘The House’ not only reunites Will Ferrell and Amy Poehler for the first time since they appeared together in ‘Blades of Glory’, but it is the directorial debut of screenwriter Andrew Jay Cohen, of ‘Bad Neighbours’ fame. Written by Cohen and his ‘Bad Neighbours’ collaborator Brendan O’Brien, ‘The House’ is a film with a familiar and thin plot, but it soars to comedic heights by teaming Poehler, Ferrell and Mantzoukas up, with Nick Kroll and Rob Huebel backing them up for good measure.
Will Ferrell, Amy Poehler and Jason Mantzoukas are a dream team on the screen together. Although none of them really get a chance to flesh their roles out more than what the first appear, it is clear that these actors have fun making these suburban characters completely over the top, as the glory and riches that come with an underground casino start to go to their heads. The three bounce off one another well, and it is through their support of one another that ‘The House’ goes from awkward and over the top comedy, to a laugh fest that succeeds through being utterly silly. None of the main cast, nor Nick Kroll, Rob Huebel or Allison Tolman, move very far away from characters that we have seen them play in the past, but the “if it ain’t broke, don’t fix it” attitude to the casting works well, as these actor bounce off one another superbly.
Andrew Jay Cohen and Brendan O’Brien’s screenplay is not, if we are completely honest here, anything terribly original or inspiring. Scott and Kate’s daughter is more of a plot point than a character, and there are times when the pacing feels drawn out and languid, but there are plenty of laughs to be had with the film, and as soon as the comedy turns silly, this is where the film truly comes into its own. Much of the comedy feels improvised by the experienced and clever cast however, and there is plenty of slapstick throughout the film, so it is unclear just how many of the laughs come from the screenplay, and how many come from the cast bringing their own unique talents to the film.
As director, Andrew Jay Cohen does not always manage to keep film’s story – such as it is – moving, but he does pace the jokes well throughout, and keeps the audience laughing just enough so that we do not always wonder where all of this is going to end up. As mentioned, the plot gets more and more ridiculous as time goes on, but Cohen embraces this, and allows the world of the film to support and nurture this for great comedic effect.
In all, ‘The House’ is filled with slapstick and silly laughs throughout; most of which, it seems, come from the excellent teaming up of Poehler, Ferrell and Mantzoukas, who bounce off one another incredibly well, and improvise some of the best moments and lines of the film. The plot, however, is a bit of a mess, and characters are often more like plot points than people, but the sight of Will Ferrell’s giant frame trying to scramble into a small plastic wardrobe almost allows the audience to forget this.