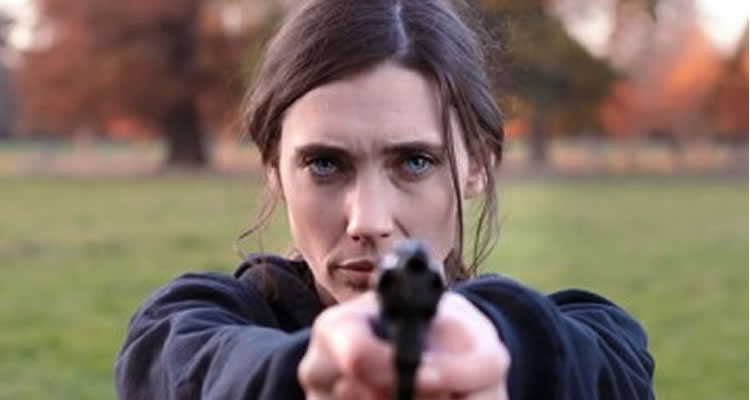 The Hit Producer; interview with director and star of new Irish movie

It may have picked up 8 awards at IndieFEST, but no-budget Irish thriller ‘The Hit Producer’ is just being released in one Dublin cinema. Paul Byrne talks to director Kevin de la Isla O’Neill and star Michelle Doherty about their shot in the dark.

Shot around Dublin over weekends on a crowd-funded budget of just €18,000, there’s plenty to admire about ‘The Hit Producer’, a black comedy thriller that’s part ‘The Player’, part ‘Nikita’, and quite a chunk of ‘Love/Hate’.Not that writer Niall Queenan and director Kevin de la Isla O’Neill (half-Irish/half-Mexican, hence the perfumed name) would have been all that aware of the RTÉ Dublin gangsta TV hit when they first started out creating ‘The Hit Producer’. For each of them, and for most of their cast and crew, this was a shot in the dark, a first-time feature built out of a lust for film, a plethora of favours, and some 18-hour shooting days.

Charting the mildly ridiculous adventures of a struggling Dublin film producer (Michelle Doherty) who is forced to go trigger-happy deep into Dublin’s underground after a financing deal goes bizarrely bloody, ‘The Hit Producer’ picked up a staggering 8 awards at the IndieFEST Film Awards in California last September – including Feature Film, Directing, Cinematography, Script/Writer, Editing, Best Actress, Best Actor and Title/Credit Design. So, how come it’s only opening in one cinema in Dublin, namely Movies@Dundrum?

“It’s just a really, really tough market for small films in this country,” offers Kevin de la Isla O’Neill, who arrived here in 1996 and has worked in just about every department of TV and film here. “There’s also that peculiar relationship we have here with our own films. Irish people don’t really go to Irish films, unless it’s one of our historical heroes or a naughty, knockabout comedy. So, we’re incredibly happy that this tiny film is getting a cinema release here. And incredibly proud.”

For Michelle Doherty, who has risen up through the ranks of model, award-winning TV presenter (including cult favourite ‘Night Shift’ and ‘Xposé’) and radio DJ (Phantom’s Finest Work Songs) and now actress (making her feature debut with Lenny Abrahamson’s ‘What Richard Did’), the chance to play an ass-kicking assassin on the mean streets of Dublin was reward enough.
“I’ve been on both sides of this game, interviewing people who’ve made albums, films, written books and all the rest,” she says, “and it’s always a long shot. You just never know how your work is going to turn out, or how it’s going to be received. So, to pick up 8 awards at IndieFEST, and now to be having the Dublin premiere, this is all a win as far as we’re concerned.
“We all threw ourselves into the making of this film, and to see it go out into the big bad world and get some very big slaps on the back, that’s just amazing…”

So, the fact that ‘The Hit Producer’ is unlikely to cause any scuffles over seats at the box-office isn’t an issue…?
“It would be nice to think there would be some kind of arm-wrestling contest for the last ticket on that opening night in Dundrum, but, I think we’ve all been in this business long enough to have some more realistic expectations,” smiles O’Neill. “We’re just happy that our horse made the grade, and is in the race. We don’t expect to win the weekend’s box-office in Ireland.”
“We’re up against ‘The Lobster’,” nods Doherty, “so, we’ll be looking at that thoroughbred’s arse for most of the track.”

In a film industry as small as Ireland’s, getting your first film out there is more of a calling card than any great gamble on becoming an instant millionaire movie mogul. And for both O’Neill and Doherty, and the rest of the cast and crew involved, ‘The Hit Producer’ seems to be doing its job.

“Everyone involved in this movie really put their heart and soul into it,” says O’Neill, “and, again and again, we have people telling us that they can’t quite believe what we achieved on such a small budget. That’s really a big part of what we set out to achieve – a film we could be proud of, and that would show the world what we’re capable of…”

Doherty nods in agreement.
“Forging a film career in Ireland is a long road,” she says, “and you just have to keep on making good work before you get anywhere close to being truly successful. So, something like ‘The Hit Producer’ is an incredible first step for everyone involved, and although it’s unlikely to break any box-office records, it will change a few lives, I reckon.

“Truth be told, if I don’t get a call from Scorsese or Tarantino by Monday morning, I’ll be gutted…”