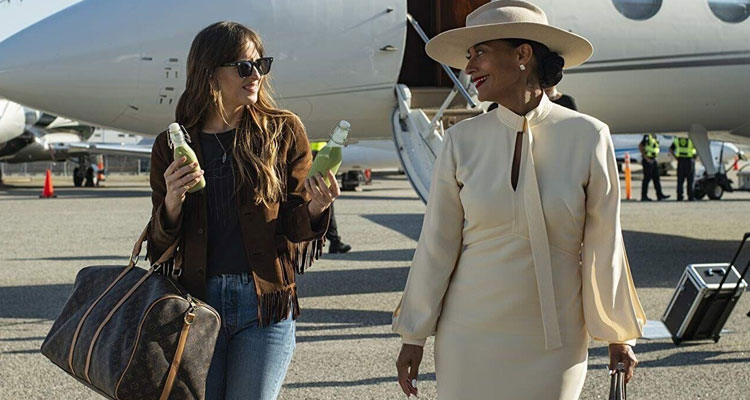 The Plot: In the fast-moving and often merciless world of the music industry, Grace (Tracee Ellis Ross) has found fortune, fame and respect among her peers. Now that she’s reached a certain age, her manager Jack (Ice Cube) thinks she should play it safe with a residency in Las Vegas. Nothing wrong with that, but there’s limited chance for diversification in her talent. Maggie (Dakota Johnson), her assistant of the last three years, thinks otherwise. While Maggie runs daily errands and organises Grace’s hectic schedule, she’s been in the business long enough to know what makes it tick. Hoping to branch out as a producer in her own right, Maggie has a meet-cute with David (Kelvin Harrison Jr.) – an aspiring singer. This potential conflict of interest will cause ripples for both the superstar and her confidante…

The Verdict: The latest film originally intended for a theatrical release to instead head to premium video on demand from 29th May is The High Note, an observational drama about an ambitious assistant-turned-producer in the L.A. music scene. This is framed through the 3-year relationship between the assistant and her superstar boss. Refreshingly though, screenwriter Flora Greeson eschews diva antics, emotional breakdowns and the risks of station hopping by instead focusing on levelling the playing field between her two lead characters, Maggie and Grace. Greeson herself worked as an assistant in the entertainment industry, channelling her insider experiences into a thoughtful screenplay which portrays the challenges that women face in a male-dominated industry. This is evident in an amusing boardroom scene in which the two women are surrounded by men who think they know better.

If anything, Maggie is the one who knows better here. With an ear for what sounds good, she suggests improvements to Grace’s music and gets the right, more authentic tone. The film is viewed through her eyes as she navigates her own journey, branching out on her own to develop latent abilities as a producer. As a depiction of the ups-and-downs of the creative process, director Nisha Ganatra strikes the right tone by ensuring that both Maggie and Grace are fully-formed characters. They’re played with an easygoing onscreen chemistry and mutual respect by Dakota Johnson and Tracee Ellis Ross, with both actors in sparkling form. This is less of a business relationship and more of a friendship between two women who feed off each other’s talents – pushing each other to greater heights in the process.

This is the film’s greatest strength, thereby avoiding the pitfalls of portraying these two talented women as competitive of each other. Ganatra’s previous film was the Emma Thompson-starring Late Night, which touched on similar themes about how women of different races and ages need to work together and take risks in the workplace to further their careers. The High Note has a stronger and more punchy script though, which Ganatra mines for what it’s worth by bringing in familiar, welcome faces like Bill Pullman and Ice Cube to inject more character into what could have been standard supporting roles. The burgeoning romance / talent development between Maggie and David is also sweetly played, even if it falls into a familiar trap of a deception.

There is a late third act revelation which you may or may not see coming, which in retrospect comes across as too underdeveloped at that stage to take seriously. It’s a clunky plot development which attempts to tie everything up in a neat little bow. Unnecessary yes, but it doesn’t disrupt the hopeful tone about following your dreams – wherever they lead and whoever you end up on the journey with. The High Note hits the right notes to maintain good vibes all round.

THE HIGH NOTE is available to stream on demand in Ireland from May 29th.