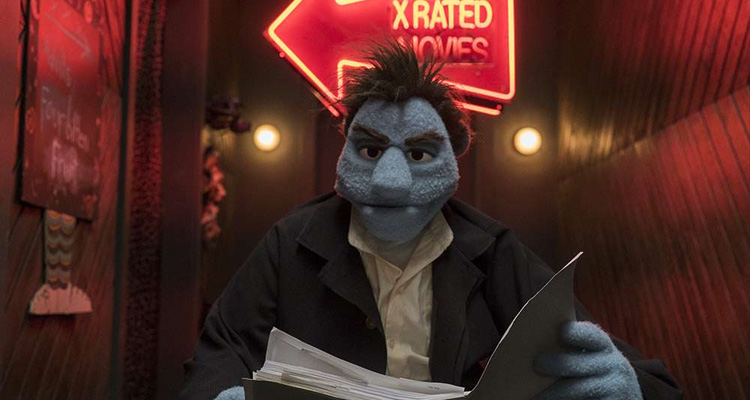 In short: A bunch of muppets

The Plot: In a world… where puppets and humans co-habit, someone is causing trouble for the small felt ones. A mysterious assassin is taking out the puppets of a 1990s kids TV show. On the case is former cop and now Los Angeles private detective Phil (Bill Barretta), who has a personal connection to the TV show – that of former presenter and lover Jenny (Elizabeth Banks). Phil has an uncanny habit of being around when the murders happen, so human Detective Connie (Melissa McCarthy) teams up with him to investigate and keep his name clear. They have a history together, so it’s like old times again. Except these old times involve nymphomaniac wives, sugar-addicted and washed-up stars and puppets, in general, behaving badly…

The Verdict: The Happytime Murders begins with a logo for HA – Henson Alternative. Right from the get go, there’s your mission statement. The Henson family is synonymous with family-friendly puppets, with the late Jim Henson enchanting generations of children with the likes of Sesame Street, The Muppets and, best of all, The Dark Crystal and Labyrinth. His son Brian has toiled away on such productions, but all that sunshine and positivity must have become wearying. He secretly harboured a dirty mind, hence his latest film The Happytime Murders – which is most definitely not family-friendly.

Having provoked the ire of the makers of Sesame Street with the film’s tagline ‘All street, no sesame’, Brian Henson’s intention was to tear down walls here. If anything, this film is akin to tearing down those walls with a blunt bread knife. There’s nothing strikingly original about The Happytime Murders. Who Framed Roger Rabbit posited a similar world. The script by Todd Berger and Dee Austin Robertson takes your basic world-weary-private-detective- investigating-a-murder template, then grafts on puppets, sex, drugs and as much unsuitable content as it can get away with without earning the dreaded NC-17 rating in the US.

While that is in itself amusing, that soon wears off when it becomes apparent just how weak the story is and how much the humour is being crude just for the sake of it. There’s no attempt at sophistication here – it’s very much ‘all street’, right down to the over-the-top sex scene and a silly nod to Basic Instinct’s most infamous shot (rather un-PC now in the current climate). Even McCarthy, now a pro at this kind of mismatched buddy comedy, can’t save the script from itself. She’s merely going through the motions. It says a lot that the end credits are funnier than the rest of the film.

The Happytime Murders is a film about a bunch of muppets made by a bunch of muppets. It’s the poor man’s Team America: World Police. The gap of 22 years in directing feature films shows a rustiness on Henson’s part. If he wants to break free from the family name and come up with alternative content, then he needs to pay attention to the script and what makes audiences laugh. A paltry effort overall.