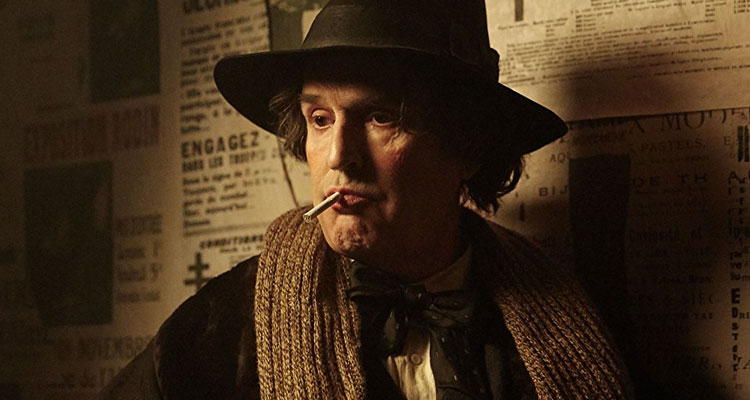 In short: A promising debut

The Plot: According to his own words, Oscar Wilde (Rupert Everett) is a ruined man. Having being convicted of gross indecency with men and served two years hard labour, he finds himself an exile from his own country. It’s late Victorian 1897 and he now lives in Paris under an alias with committed lover Robbie (Edwin Thomas) and is visited by old friend Reggie (Colin Firth). Back home, his shamed wife Constance (Emily Watson) pays him an allowance as long as he stays away from former lover Bosie (Colin Morgan). Before long though, Bosie returns and upsets the apple cart. It seems that Oscar’s infamy can catch up with him across The Channel. As his health declines, he ponders his life, his successes and failures…

The Verdict: Rupert Everett is an actor who we don’t nearly see enough of. That may soon change with his fine directorial debut The Happy Prince, which he also wrote. It’s a showcase for the quietly-spoken Englishman’s many talents while neatly playing into Oscar Wilde’s own saying about the only thing worse than being talked about is not being talked about. Having had his own dalliances with Wilde on screen with An Ideal Husband, Everett has zeroed in not on Wilde’s downfall but the aftermath and the consequences of being a ruined man.

You can run from your past, but you can’t hide from it. This makes for compelling viewing, as we view a witty literary giant in decline towards his eventual, untimely death at the age of 46. This might sound like a navel-gazing misery-fest, but it’s far from it. It could have gone down that road if Everett had chosen. Instead, he maintains Wilde’s sense of humour and joie de vivre as he ventures to Naples and encounters other young men along the way who catch his eye.

For a film that is about a man facing his own mortality, it’s surprisingly full of life, warm humour and a keen knowledge of just what made Wilde tick. It’s a sympathetic portrayal viewed from a more liberal 21st Century perspective, but one which keeps in tone with Wilde’s own times. The Victorians may have seem repressed, but they loved bodice-rippers as much as anyone else. Though, why it took so long for Wilde to be pardoned for his homosexuality is a question worth asking. Like any true actor, Everett disappears into the character to the point where he just is the character. It’s an under-stated but powerful performance, capturing the sadness and hope of the character. At one point, Wilde says that the solution to suffering is love. Love is everything.

Clearly this film is a labour of love for Everett. His direction is focused but unfussy, allowing different perspectives on the man through other characters too. He surrounds himself with a good supporting cast, though the ever-excellent Watson is under-used. John Conroy’s luminous cinematography uses golden natural light to beautiful effect, so that it takes on an autumnal feel even though the film is about a man in the winter of his life. With a title that alludes to one of Wilde’s own stories, there’s a lot to admire about The Happy Prince. Yield to this temptation of a film and prepare to be wowed by Everett’s auspicious move towards directing.