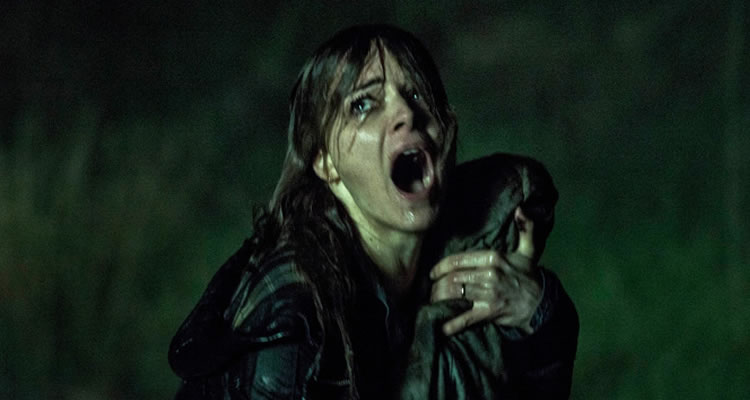 THE HALLOW (UK/USA/Ireland/16/97mins)
Directed by Corin Hardy. Starring Joseph Mawle, Bojana Novakovic, Michael McElhatton, Gary Lydon, Stuart Graham, Conor Craig Stephens, Joss Wyre.
THE PLOT: “Don’t tell mum,” says Adam (Mawle) to his infant son Finn as he gathers some 500-year-old parasitic fungi from an old Irish ruin, having been sent to survey the forest for a development company. Back home, his wife, Claire (Novakovic), is being warned again by concerned and mildly manic local Colm Donnelly (McElhatton), adamant that the couple leave these dark, troubled woods alone. When something goes bump, crash, bang wallop later that night in Finn’s room, the local garda (Lydon) repeats the threat in only slightlier sunnier tones.
And that’s when all kinds of dark, black magic hell breaks loose, with the couple soon battling plenty of diddley-aye demons in the night whilst clearly struggling with a few inner demons. Such as our increasingly rabid Adam becoming convinced that their little Finn has been replaced by an evil twin.
THE VERDICT: It’s ‘The Thin’g meets ‘The Shining’, meets, eh, ‘Bracken’, as Corin Hardy’s critical fave makes it to the big screen here. Well, when I say critical fave, this was a hit at Sundance and later the horror fest circuit – so, the critics in question were both biased and boggled-eyed after sitting through 5 other films that day.
Still, it’s not difficult to see why this monster mash has been hitting the right spots with lovers of all things gorey and grotesque.
In truth, there are plenty of hippy couples living in technically abandoned old houses in the wilds of Ireland going through their own existential crisis day by day, by day, by day, and so ‘The Hallow’ may not seem all that far-fetched to Irish viewers. In truth, it only gets interesting in the last 10 or 15 minutes, as we abandon all the blinky torch basement cliches and go full retard on the primal parent scream stuff. Up to that point, ‘The Hallow’ is more than a little hard to swallow.
RATING: 2/5
Review by Paul Byrne