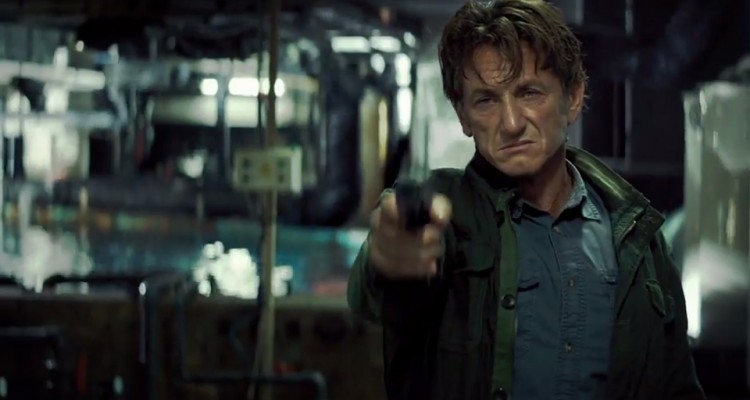 THE GUNMAN (Spain/UK/France/16/115mins)
Directed by Pierre Morel. Starring Sean Penn, Javier Bardem, Ray Winstone, Idris Elba, Mark Rylance, Jasmine Trinca, Melina Matthews, Peter Franzen.
THE PLOT: “I recorded virtually everything,” says Sean Penn’s fugitive hitman, “and I’m going to throw it out where the world can see it.” That’s pretty much all you need to know about the plight of Jim Terrier (Penn), forced to go on the run when his past – assassinating a minister in the Democratic Republic of Congo some years earlier – comes looking for revenge. Having committed the assassination on the orders of his associate Felix (Bardem), Terrier soon realises that he has no one to turn to. Going underground, he turns to old mercenary days partners-in-crime (Rylance’s Cox, Winstone’s typically cor-blimey Stanley), before heading to Barcelona, where Felix is now living with Jim’s old flame, Annie (Trinca)…

THE VERDICT: If not quite at the Robert De Niro stage of his career – having yet to cash in his credibility chips for some panto payola – nonetheless, these days, Sean Penn inhabits that strange world where he’s rightly admired for the intensity and integrity he usually brings to his craft and yet, on a fairly regular basis, he squeezes out some very so-so movies (FAIR GAME, WHAT JUST HAPPENED, THE INTERPRETER, etc). The Gunman is one of those latter so-so movies, the stark title’s promise of a nod to Leone or the gangster movies of the 1970s falling at the first hurdle – then again, it does share a director with TAKEN. Having co-written the script and produced here, Penn is taking a deliberate step into the revenge thriller schlock of box-office gold that Liam Neeson found at the end of the rainbow. Unfortunately, THE GUNMAN is never quite gritty and grimy enough to qualify as truly thrilling, nor is it silly enough to be TAKEN 4.

One of those Euro-pudding, globe-trotting actioners that tries to beat Hollywood at its own game, THE GUNMAN falls considerably short on just about every front. Someone like Jason Statham can make this kind of bonkers Bond Bonzai work, but, being far too serious an actor for any fun and games, Sean Penn could never quite channel Chuck Norris the way Neeson does.