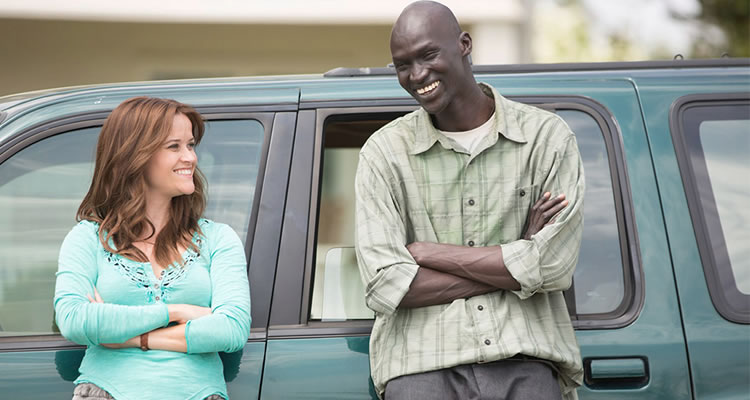 THE PLOT: Having spent many years in a Kenyan refugee camp after Sudan was engulfed in civil war, refugees Mamere (Arnold Oceng), Jeremiah (Ger Duany) and Paul (Emmanuel Jal) are awarded a chance at a new life in the US. When they arrive, however, they find life in the fabled land of America is very different than the one they are used to.

THE VERDICT: Refugees from Sudan who found themselves scattered around the world are now The Lost Boys of Sudan, and there is little doubt that the stories of these survivors, and the hardships they went through are daunting. Ger Duany and Emmanuel Jal, who play Jeremiah and Paul in THE GOOD LIE, were both forced to become child soldiers, and it is perhaps this level of experience and trauma in these actors’ lives that makes the film work far better than it should.

Reese Witherspoon presumably lent her name to THE GOOD LIE in order to get the film made. Her role is rather small and unimpressive, since this is the storey of the refugees, bot the Americans who helped them. The same goes for Corey Stoll as Jack. Oceng, Duany and Jal are the emotional heart and soul of the film, and they do well in getting the audience on their sides. The trouble is, they are often let down by a trite and slightly insulting script.

Speaking of the screenplay – written by Margaret Nagle – it is the seeming desire to show how strange the Western world is to these Sudanese survivors that makes the film feel a little twee and insulting. There are entire scenes where the characters are treated like idiots for not understanding technology or the way the US works, then pandered to and talked down to when characters try to explain the way of the world to them. It is this that distracts from the power of the survivors’ story, and turns the film from a drama to a slightly cringeworthy comedy.

Director Philippe Falardeau does well enough with the action set in Sudan, when the characters are children, but when they come to the West, the film turns – probably unintentionally – into a tale reminiscent of Eddie Murphy’s COMING TO AMERICA. There is powerful emotional heart at the centre of THE GOOD LIE, but sometimes it is difficult to see, buried as it is under a layer of schmaltz and saccharine.

In all, THE GOOD LIE is a film about a subject that needs exploring, but since this film is determined to be feel good, rather than emotionally true, this is not the film needed to tell the tale. Arnold Oceng, Ger Duany and Emmanuel Jal are strong in their roles, but are hampered by an overly sweetened script that lacks subtlety.