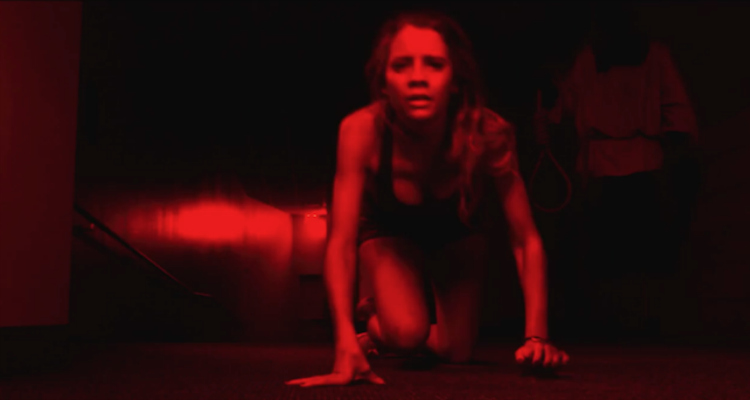 THE GALLOWS (USA/15A/81mins)
Directed by Travis Cluff and Chris Lofing. Starring Reese Mishler, Pfeifer Brown, Ryan Shoos and Cassidy Gifford.
THE PLOT: 20 years ago, a student died during the high school production of a high school play, ‘The Gallows’. To honour the anniversary, and to finally see the play performed in its entirety, the students stage a production of the same play, unwittingly setting a tragic and violent series of events into motion.
THE VERDICT: There are certain things that make a good horror movie; tension, scares and truly engaging psychological or paranormal stories. The Gallows has none of these, instead relying on loud noises and things happening off camera to keep the audience on their toes.
The cast, made up of Reese Mishler, Pfeifer Brown, Ryan Shoos and Cassidy Gifford, are never given a chance to make their characters anything more than vessels for the story (such as it is), and strongly adhere to the high school stereotypes we have seen on screen before; the jock, the bully, the nerd and so on. None of the characters are remotely fleshed out, and more than one of them are incredibly unpleasant, leaving the audience wondering why we should root for them in the first place.
The story, written by Travis Cluff and Chris Lofing, appears to take every horror movie cliché that ever there was and lob them at this film. There are so many daft decisions made by the central characters that the audience cannot help but wonder if they have any sort of common sense at all. The reason for the haunting and the murders is thin at best and the jock getting his comeuppance, while his pretty girlfriend is left to scream is something we have seen a million times before.
As directors, Travis Cluff and Chris Lofing spread the action throughout the film well enough, but the decision to use found footage, then have two cameras telling the story – which, we are told, is taken from police files, so how is it edited?! – means that the pacing and the intrigue of the story suffer. As well as this, there are some truly terrible performances here, with a lot of ‘hands in the hair’ acting going on. There are some creepy and well done shots, but these are too few and far between to make up for this uninspired and un-scary flick.
In all, THE GALLOWS is as clichéd and unoriginal as a horror movie could ever be. Surely the found footage style of filmmaking fell out of favour years ago, leaving THE GALLOWS feeling unoriginal, uninspired and definitely not scary. Bangs and crashes are not the fabric of a good horror movie, and that is about all that is on display here. Not smart, and definitely not scary.
RATING: 1/5
Review by Brogen Hayes