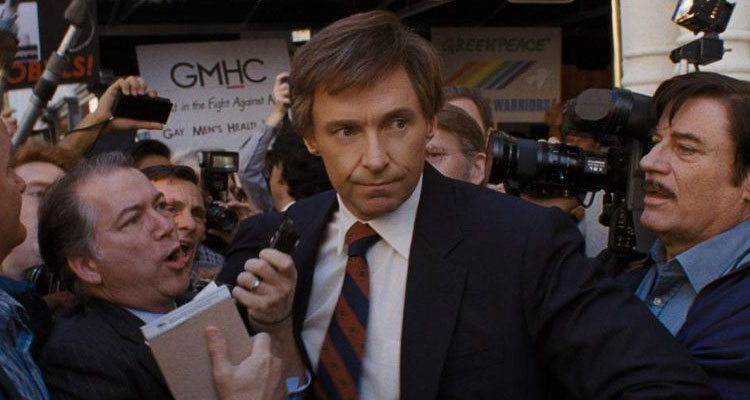 The Plot: It’s 1988 and the US Presidential campaign is in full swing. Kansas-born and Colorado-based Democratic senator Gary Hart (Hugh Jackman) is the youngest candidate at 46. He’s a promising, idealistic family man supported by his wife Lee (Vera Farmiga) and their now adult children. As the front runner, a lot is expected of him. His campaign manager Bill (J.K. Simmons) finds that some serious damage control is required when journalists from the Miami Herald follow Gary’s movements to a townhouse in Washington D.C. They spot former model Donna (Sara Paxton) coming in and out and publish their story that Gary is having an illicit affair. The face of politics has changed, much to Gary’s surprise. A politician’s private life is now a very public affair…

The Verdict: The multi-talented Hugh Jackman may have hung up his adamantium claws, but he continues to seek out challenging roles that probe the innate decency that he channels into his characters. That’s something that director Jason Reitman latched on to when casting the lead role of former Presidential candidate Gary Hart in The Front Runner. It’s based on the book All The Truth Is Out by Matt Bai, who co-writes the screenplay here with Reitman and Jay Carson. If you’re expecting a salacious expose of the secret shenanigans behind those tightly-closed doors in Washington then you’ve tuned in to the wrong channel. The Front Runner is a more sombre affair (literally) in that it charts the point at which private lives can become of public interest in American politics.

Reitman takes a wide-ranging approach to Gary Hart’s fall from grace due to this affair that rocked his marriage and even more so his campaign. He views it from different angles: from Hart’s family; to the staffers on his team; to muck-raking journalists in the Miami Herald; to even the revered Washington Post, where the legendary Ben Bradlee (Alfred Molina) has to make a decision to get involved or watch other publications hog the limelight. It’s telling that in one particular scene Bradlee notes a change in the times, when the Washington Post previously turned a blind eye to the indiscretions of former Presidents. It’s a prescient message for our current troubled times, when we have a former reality TV star in the Oval Office – and he’s hardly an ideal candidate himself.

There’s a saying that a week is a long time in politics. The Front Runner charts three very long weeks in Hart’s life, as his campaign comes apart at the seams due to his inability to understand that change in the times. Reitman isn’t so much interested in the scandal but more in how Hart deals with it on a personal level. When he’s confronted by Lee, he doesn’t need to say much. It’s all in Jackman’s eyes, a quiet admission of guilt and shame. There’s a sense that Reitman has too much respect for Hart to drag him through the mud repeatedly. This is as it should be – Hart could have been a contender, he could have had class. Instead, he was subject to his own human frailty and duly fell on the sword that the hungry media propped up for him. Reitman also analyses the effect on Donna, showing that even a woman previously used to being looked at could be frightened by intense media attention.

Jackman is superb here, keeping Hart grounded but gradually coming to the realisation that the affair is overshadowing the potentially good work he could do as President. It’s a tricky role to play, given the potential to pass quick judgment on Hart. Jackman portrays him as a flawed man with high ideals, thereby creating a certain level of sympathy for Hart. He’s well-supported by Farmiga and Simmons, who add their own perspectives on Hart’s rapid descent. Reitman keeps his direction low-key, focusing more on character and wringing the most out of those emotionally-charged scenes when Hart has to confront the truth of his behaviour. There’s much to admire here, but what impresses the most is Reitman’s restraint and use of discretion in telling Hart’s story. The Front Runner is a scandalously good period drama which is even more relevant now.