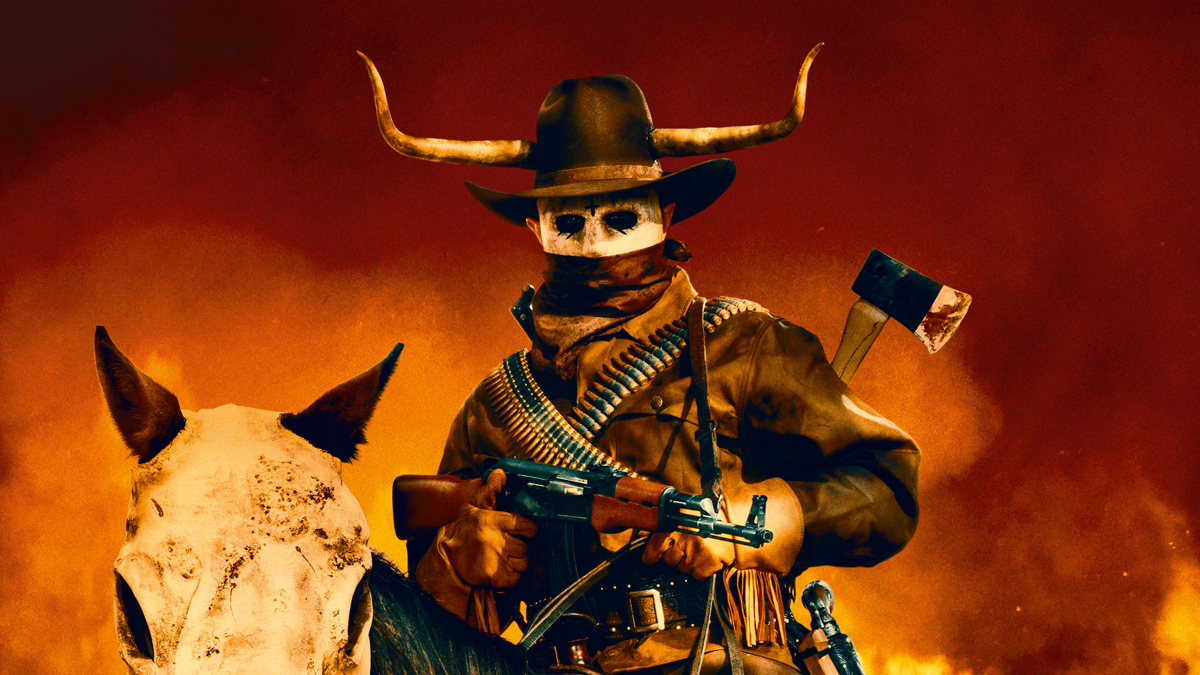 The Plot: Illegal Mexican immigrants Juan (Tenoch Huerta) and Adela (Ana de la Reguera) sneak across the border into Texas. Several years later, Juan is working as a ranch hand for the taciturn Dylan (Josh Lucas). Not a fan of immigrants, Dylan doesn’t like or trust Juan much. However, they’re thrown together the following day. The annual Purge occurs and after a tense nighttime lockdown, everything seems fine in the morning. That is, until masked thugs seeking the purification of America declare ‘The Forever Purge’ and that the carnage will continue thereafter in breach of regulations. A day of reckoning is coming…

The Verdict: After four films and two seasons of a television series, The Purge cycle has edged towards its perhaps inevitable conclusion with fifth entry The Forever Purge. Reportedly the last in the series, though don’t count on it, The Forever Purge follows through on the build-up of American rage exploding for 12 hours once a year and takes that concept further into new territory. The murder and chaos doesn’t stop at dawn, but continues into the day and beyond as America takes Mad Max to its bloody heart as the ideal template to follow for the future. There are still some tricks up the sleeves of writer, producer and occasional director James DeMonaco as he teases out the possibilities for a disparate group of characters who have to band together to survive a long day and night of chaos.

Having gradually moved away from the initial home invasion concept of the first film in the series, this series has expanded to tell multiple storylines in different locations but with limited interconnectedness. This time around, the action moves to the Lone Star state for a Tex-Mex brew that makes the border / illegal immigrant scenario all the more pointed. The Trumpian nightmare parallels are all too obvious, even though Agent Orange (as Spike Lee dubs him) is old news now. At its best, the series has worked well as a violent allegory for America’s increasing divisions and extremist views – something which came into sharp focus at the start of this year when the unthinkable happened at Capitol Hill. The purgers this time want purification by killing immigrants and foreigners, failing to understand that the only real, true-blooded Americans are the Native tribes. There’s also a certain ironic glee in watching white, privileged Americans like Dylan making a desperate break for the Mexican border – as they also did in The Day After Tomorrow.

At its worst, the series has focused sharply on toxic masculinity and the overwhelming need to kill or be killed in imaginative ways. When pushed to the edge, gun nut Dylan is ready to take up arms and fight back with all he’s got – but not to shelter his hardworking employees overnight. Defending his home isn’t the issue anymore – it’s about defending his American way of life. These violent delights have violent ends, as a Westworld character once said. A straightforward shot to the head isn’t enough anymore. Characters die in many different ways here and not always in a satisfying manner. Director Everardo Gout, making his Hollywood debut, plays into those series expectations. He moves the action mostly into the daylight for a change, which emphasises the gore but loses some of the dark tension in the process.

There is a certain ruthless efficiency to the filmmaking and the purging going on, hand-in-hand. Gout keeps the plot ticking over, moving his characters forwards as America falls apart and gives in to long-lasting anarchy. There’s none of the humour or satire of the first film, when Ethan Hawke’s murderous neighbours were keen to keep going after the siren rang but had to restrain themselves. That’s par for the course in a series like this though, as sequels move away from the original concept to pursue their own agendas. The agenda here is to bring the story full circle, which Gout does with a certain visual flair and attention to detail in his frantic action sequences. The purgers are still mostly faceless, marauding goons, so there’s not much depth to them. The depth is more in the racial politics of the film, which do strike a resonant chord. The Forever Purge isn’t the strongest in the series, but if it’s to be the last then it’s certainly going out with the bang of a double-barrelled shotgun. God bless America.