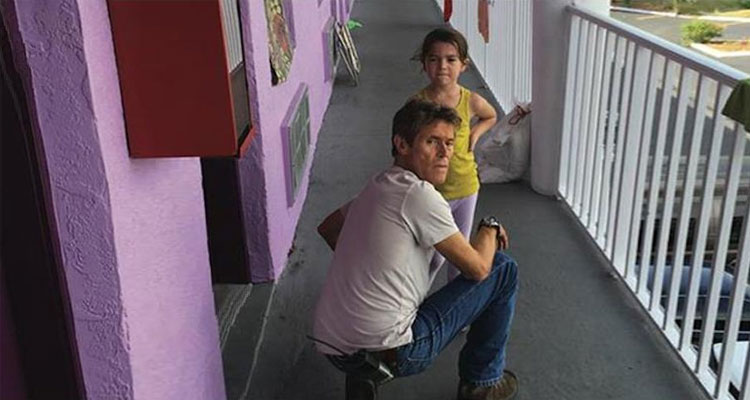 THE FLORIDA PROJECT (USA / 15A / 111 mins)
Directed by Sean Baker. Starring Willem Dafoe, Bria Vinaite, Brooklynn Prince, Valeria Cotto.
THE PLOT: It’s summer in Florida and 6-year-old Moonee (Brooklynn Prince) is living at the Magic Castle Inn & Suites with her young mother Halley (Bria Vinaite). Not in Disneyworld, but just outside it. It’s a purple-painted budget motel run by gruff but kindly manager Bobby (Willem Dafoe). Moonee is very much her mother’s daughter. The two are as thick as thieves, always seeking out mischief at every opportunity. The darker side of this is that Halley is barely scraping an existence, flogging perfume and scammed Disneyworld tickets to tourists while Moonee hustles money off other families for ice cream. Moonee plays with her friends in and around the motel, all the time aware of what’s going on with her mother…
THE VERDICT: Sean Baker’s follow-up to his hilarious, heartfelt breakthrough film ‘Tangerine’ is equally intimate in its depiction of ordinary lives on the margins of society. Whereas Tangerine was shot on several iPhones and painted a hilarious portrait of trashy L.A. street life, ‘The Florida Project’ is on a bigger canvas and features a name actor but maintains a level of character authenticity that is second to none. It’s a real charmer from start to finish, but never loses focus in its depiction of a mother’s love for her child – and the importance of holding on to childhood innocence.
The casting process is intriguing here. With echoes of Sasha Lane in last year’s American Honey, Bria Vinaite had never acted before and was plucked from obscurity (Baker came across her on Instagram). She brings a chaotic but likeable naturalism to her performance, which belies her inexperience with a film camera. With no preconceived notions about where the character might go (imagine if Jennifer Lawrence had been cast), it’s easier to accept to Halley as a caring, loving mother – even if she doesn’t always do the right thing. Dafoe brings some sturdy reliability as well.
However, the real star of the show is young Prince. With only one other credit to her name, she acts everyone else off the screen. She’s able to maintain that childlike sense of fun and play, while being quite aware of what grown-ups are going through. That’s such a difficult thing to get across onscreen with a child actor, but Prince is a total natural. Baker’s camera just loves her and gets in close to her occasionally goofy face. It’s as if he just let her run loose on the film set and be herself, rather than try to be an actor pretending to be someone else.
The film is somewhat loosely structured, with no immediate destination or goal for the characters. It takes a while for the freestyle plot to reveal itself, so some patience is required. That’s a minor flaw though, as these characters are relatable. There’s an interesting parallel going on here in the film’s environment – that of harshly-tinged reality existing just outside a fantasy world for children. There’s a remarkable sequence later in the film which goes from intense sadness to intense joy in the blink of an eye. Experience will replace innocence in time. With a nod to J.D. Salinger’s The Catcher In The Rye, Baker is suggesting that kids should be allowed to be kids and not grow up too fast. ‘The Florida Project’ is a colourful, charming story of child’s play fronted by a star-is-born performance. Seek it out.
RATING: 4 / 5
Review by Gareth O’Connor