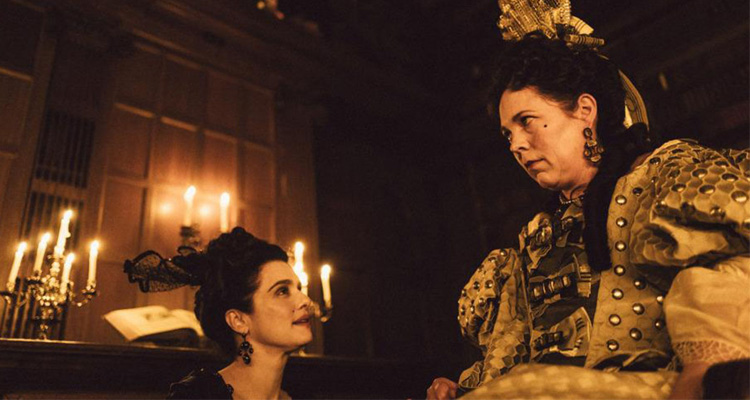 The Plot: 18th Century England. Queen Anne (Olivia Colman) is not a well woman. Stricken by a bad leg, she’s mostly confined to quarters. Her close friend Lady Sarah (Rachel Weisz) relays the Queen’s commands to parliament. Opposition leader Harley (Nicholas Hoult) is keen to influence the Queen via Lady Sarah, with an ongoing and costly war raging in France. But none of that really matters, because the Queen is a rather cranky and attention-seeking monarch. She dotes on Lady Sarah, who is secretly her lover. The arrival of Lady Sarah’s upstart young cousin Abigail (Emma Stone) stirs things up. Taking a job as the Queen’s maid, Abigail worms her way into her heart and then really throws the cat among the pigeons…

The Verdict: Greek director Yorgos Lanthimos has gained respect and a certain notoriety over the past few years. His films are very particular things, often with an offbeat sensibility but always intriguing nonetheless. For his third English-language film and corresponding production with Dublin-based Element Pictures, he’s delivered a dark delight in the shapely form of The Favourite. While his previous film The Killing Of A Sacred Deer was a rather cold and detached sacrificial offering, The Favourite is a much warmer and wittier affair. It’s his most accessible film, which is saying something. It’s also arguably his best film yet, given how carefully calibrated and supremely confident it is.

Lanthimos has been given a real cherry of a script to work with, based on an actual period story. Deborah Davis and Tony McNamara’s razor sharp script re-imagines 18th Century English court life as more female-centric, a refreshing change for once in a period drama. Women have a more prominent role in this court and men are either playthings or rakes looking for a romp. This is no stuffy chamber piece though. The script focuses on the backbiting, rivalry and vicious wordplay between the three women, as a power struggle develops between Lady Sarah and Abigail over the Queen’s affections. Davis and McNamara deliver some real zingers, with the Queen bellowing at her subjects or berating a doorman for sneaking a look at her.

To breathe life into these wonderfully bitchy characters, you need committed actors who can dig their teeth into these roles. Colman, Weisz and Stone all rise to the challenge, going at their roles with gusto. The ever-excellent Colman sheds any sense of self-consciousness and goes for a warts-and-all approach. Sad, pathetic and desperately in need of love to validate her existence, Queen Anne is possibly a career-best from Colman. Weisz is darkly funny, while Stone is a delight as the scheming maid with ideas well above her station. Expect Oscar and BAFTA nominations in the coming weeks.

Lanthimos uses his roving camera (occasionally with a distorted fish eye lens) to capture his world of pomp, privilege and bad behaviour. When the characters are not ravishing each other, the film is ravishing to look at – credit to Irish cinematographer Robbie Ryan. This is supported by a score that is appropriate to the period – but not too much. Lanthimos tones down some of the oddness that has characterised his previous work, but it’s quirky enough to include duck races and rabbits hopping about (the animal imagery is a theme that runs throughout the film). With an undercurrent of dry humour throughout, The Favourite is a deliciously wicked treat that kicks off 2019 in style.