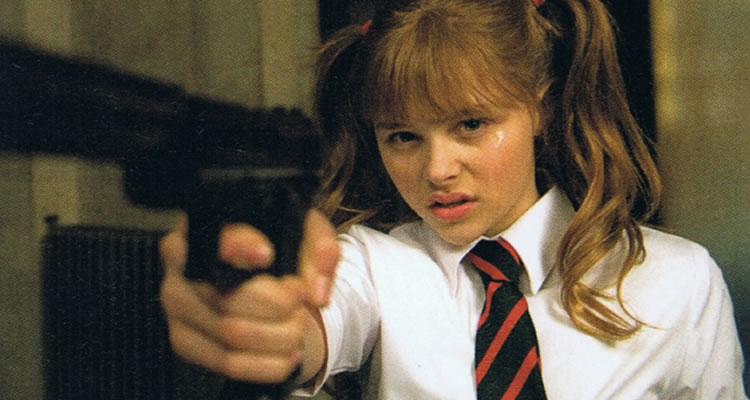 The Evolution of Chloë Grace Moretz

We take a look back over the actress’ career to date…

This week, Chloë Grace Moretz takes a step into the world of the romantic drama, with IF I STAY. Moretz plays Mia, a young woman thrown into a coma after a car accident, who finds herself having to make a decision about her future.

Since Moretz made her movie debut in HEART OF THE BEHOLDER, she has proven herself an actress with a great range, and a skill for choosing diverse projects. With this in mind, we decided to take a look back over the career of the 17 year old actress…

Chloë Grace Moretz made her TV debut at the tender age of seven, in the TV show THE GUARDIAN, and went on to have roles in DESPERATE HOUSEWIVES, DIRTY SEXY MONEY and MY NAME IS EARL, as well as voice the character Darby in MY FRIENDS TIGGER AND POOH. In 2009, Moretz had a small but memorable role in (500) DAYS OF SUMMER as Rachel, Tom’s (Joseph Gordon-Levitt) rather young, but very wise, younger sister. It was perhaps this role that showed the actress’ maturity and range, which meant her casting as the tiny but fearsome Hit-Girl in KICK-ASS was not really a surprise.

In KICK-ASS, Moretz played a young girl whose father taught her how to be a vigilante, fire guns and, well, kick ass. When she teams with the titular hero, Hit Girl becomes a non-stop killing machine, hell-bent on taking down the bad guys. There was an outcry at having such a young and violent character in KICK-ASS, but regardless of what you thought of the film, it was hard to deny that Chloë Grace Moretz was an actress with courage, charm and presence.

After KICK-ASS, Moretz seemed to want to balance out Hit Girl, and took roles in DIARY OF A WIMPY KID and JACK AND THE BEANSTALK, it was not long, however, befre the darker side of entertainment grasped at Moretz again, and she took the role of Abby in the English language remake of LET THE RIGHT ONE IN. As Abby in LET ME IN, Moretz played a vampire turned and stunted at a frighteningly young age. She befriends a boy who lives next door to her and, upon reveleaing her secret to him, also reveals herself to be a creature capable of loyalty and friendship, as she refuses to kill her new friend. LET ME IN was one of the best-reviewed films of 2010, and further cemented Moretz’s position as a young woman capable of mature and engaging performances, and as a young woman whose star was on the rise.

Moretz’s next big role was in 2011’s HUGO, where she teamed up with director Martin Scorsese in the big screen adaptation of Brian Selznick’s beautiful novel; THE INVENTION OF HUGO CABRET. Although Moretz’s role was not a huge one, she proved, once again, that she has a talent for choosing diverse and interesting roles, as she played the granddaughter of Sir Ben Kingsley’s Georges Méliès. Moretz brought kindness and gentleness to the role, and proved that she has more in her repertoire than scary horror movie characters.

After a brief turn in Tim Burton’s DARK SHADOWS – as a young girl who is hiding a dark secret – Moretz played the aggressive and deceptive Kaylie Hooper in 30 ROCK – proving that she is more than a match for the might of Alec Baldwin – lent her voice to AMERICAN DAD! and resumed her most famous role as Hit Girl in KICK-ASS 2.

Last year, as well as a blink-and-you’ll-miss-it role in MUPPETS MOST WANTED, Moretz starred in the remake of CARRIE. Although this is perhaps the role that Moretz was born to play, the film was not well received, although Moretz’s performance was praised. Maybe this was an indication that audiences wanted something more from the young woman we know as Hit Girl.

This week, Moretz reminds us that she is, after all, a 17-year-old girl, as she takes on the role of Mia in the romantic drama, IF I STAY. The actress is also adding another string to her bow in the near future, as she takes on not one, but two roles in thrillers; DARK PLACES and THE EQUALISER. No matter what she turns her hand to, Chloë Grace Moretz is a young actress on the rise, and definitely one to keep an eye out for, as she grows and evolves on the big screen.

IF I STAY is released in Irish cinemas on August 29th