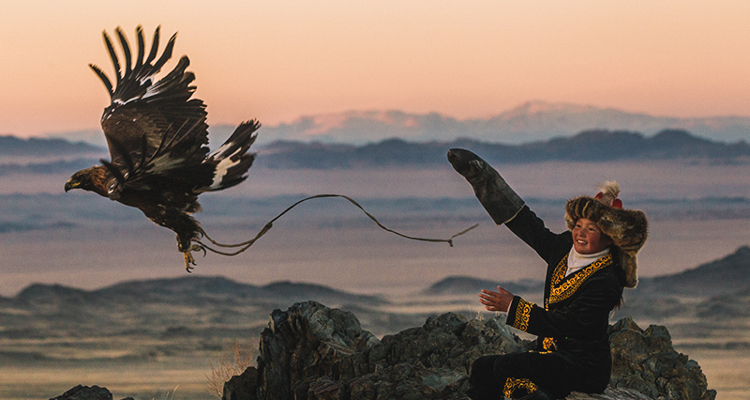 THE EAGLE HUNTRESS (UK|Mongolia|USA/TBC/87mins)
Directed by Otto Bell. Starring Aisholpan Nurgaiv, Daisy Ridley (narration).
THE PLOT: Deep in the Altai Mountains of Mongolia, the nomads have hunted for food for a millennium with the help of well-trained golden eagles. These men become eagle hunters, respected and admired by their people. It is a calling, passed down from father to son, from generation to generation. However, that is all set to change. Aisholpan Nurgaiv, a rosy-cheeked 13-year-old girl, wants to be the first eagle huntress. Her father encourages her, believing in equality between males and females. Why should both gender and age be a barrier to anyone’s dreams? The nomad elders have their doubts, expressing concerns about Aisholpan’s strength and ability. However, she asserts that girls can do anything boys can. So, she sets out to capture and train an eaglet and then compete, unannounced, as the first ever huntress in the annual Eagle Festival…
THE VERDICT: Executive produced by Ridley and one Morgan Spurlock, ‘The Eagle Huntress’ is the feature documentary debut of New Yorker Otto Bell. It apparently took him his life savings of $80,000 to make, but he was determined that his debut would be about Aisholpan Nurgaiv. His belief in his subject and her ability with eagles is well-founded, as she becomes the heart and soul of this inspiring charmer. Aisholpan challenges accepted traditions and patriarchal attitudes about male / female roles in her world. Why should boys be the only ones to go out and hunt? There is a modest quality to Aisholpan, as she quietly and confidently breaks down those old-fashioned attitudes, first by scaling a dangerous cliff to capture an eaglet. Then she trains it and brings it to the Eagle Festival, where she breaks records against older and more experienced male eagle hunters. It seems that an eaglet responds more intuitively to a huntress.
Mongolia has featured in documentaries before, like in ‘The Cave Of The Yellow’ Dog, but rarely has it looked so wild and beautiful. Using drone cameras, cinematographer Simon Niblett swoops in and out of the vast landscapes like an eagle. It is a film of the epic and the intimate, both of which are balanced out by Ridley’s skilful narration. Thankfully, it is not too intrusive. Instead, Bell lets his subject and her family do most of the talking, with Ridley filling in the background colour. Aisholpan is quite a subject though. She is an ordinary girl who likes girly things like nail polish and goes to school during the week, where she is a straight-A student. She dreams of being a doctor, but after seeing this film there can be no doubt that she is an Eagle Huntress.
As the Sia song that plays out over the end credits suggests, you can do anything. That is the key message of this highly entertaining, engaging and inspiring documentary about the universal power of dreams, hope and youthful ambition. Barriers can be broken and that is something that we can all learn from, whether young or old, male or female.
RATING: 4/5
Review by Gareth O’Connor