The Plot: Newcastle, 1961. Mild-mannered and chatty taxi driver Kempton Bunton (Jim Broadbent) thinks it’s his civic duty to challenge perceived injustice. By removing a component from his television set so he can’t receive the BBC, he claims that he doesn’t need a television licence. That’s not the only thing he feels aggrieved about, much to the irritation of his wife Dorothy (Helen Mirren) and the support of his eager son Jackie (Fionn Whitehead). When Francisco Goya’s famous portrait of the Duke Of Wellington goes on display the National Gallery with much fanfare, he pops down to London to ‘borrow it’ and change things for the good of all…

The Verdict: When is a theft not a theft? The answer to that lies in The Duke, a most curious story from 20th Century British legal history that lends credence to the theory that truth is stranger than fiction. It relates the true story of one Kempton Bunton, a 60-year-old social justice activist who stole a Goya painting and then sent scribbled ransom notes to the police asking for the money to be donated to charity. He wanted to help those who couldn’t afford the burden of a television licence and other cost-of-living expenses (topical at the moment). It’s the kind of Robin Hood-style, life-affirming story that is ideal for a film adaptation which benefits greatly from that truth is stranger than fiction theory. On its surface, The Duke has all the whimsy and quirkiness you might expect from such a story that perhaps could only have happened in Britain with its clearly-defined class divisions. Dig deeper though and there’s more at work.

The script by Richard Bean and Clive Coleman is deceptively simple in its setup, establishing Kempton’s character, explaining the rationale for his actions and then moving towards a climactic courtroom scene. Well, not that climactic as it perhaps justifiably goes a little soft on its subject. While it leans into that simplicity, it also moves around its characters to establish them as decent folk trying to initiate change by doing something provocative. This is where the script really shines, moving beyond its basic premise to become something more meaningful for societal change – in a time when society and youth culture was changing rapidly. It therefore becomes a message movie wrapped up in an appealing package, but with the kind of directorial nuance that strengthens it over its just-right 95 minutes. That’s down to the late Roger Michell, an often underappreciated journeyman director who made similarly-structured, in-disguise films like Enduring Love and Venus.

Michell’s direction here is very fluid and unobtrusive, letting his actors get down to the business at hand in making the characters and their motivations credible. It’s the way that he guides them through the story that impresses the most, moving from potentially life-changing situations to scenes of quiet domesticity that are charmingly quaint. If there was a big panic about the painting being discovered at the back of a wardrobe, Michell underplays that by letting it wash off the pleasant face of Jim Broadbent in a great example of spot-on casting. In one of his best performances to date, Broadbent brings more to Kempton than appears to be on the page, portraying him not as some eccentric quack but a near pension-age man who simply wanted to elicit change (which would come some four decades later). There are wonderful touches of lightness and joy to Broadbent’s performance as he charms the jury with his excuses, but he also portrays him as a three-dimensional ordinary man with purpose. Helen Mirren provides solid support as always, the yin to Broadbent’s yang.

The Duke is too delightful and enriching a film to be called a steal, but steal the audiences’ hearts it does with exquisite ease and returns them afterwards for the better. Guilty of being entertaining as charged. 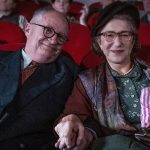