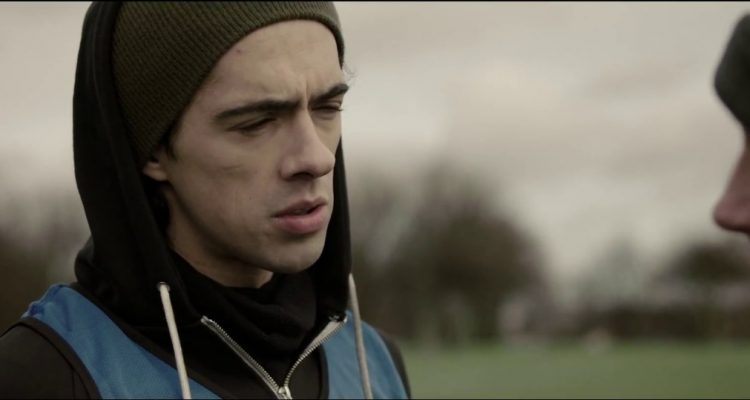 The Drummer and the Keeper

THE DRUMMER AND THE KEEPER (Ireland/15A/94 mins)
Directed by Nick Kelly. Starring Dermot Murphy, Jacob McCarthy, Charlie Kelly, Peter Coonan.
THE PLOT: We first meet the troubled Gabriel (Dermot Murphy) as he burns a sofa. He’s not having a good day. He’s a drummer who is a bit different – he has bipolar disorder, leading to wild mood swings and erratic behaviour. His band mates Pearse (Charlie Kelly), Toss (Peter Coonan) and his concerned sister organise an intervention. Gabriel is sent to play soccer at a home for gifted young people and to put his energy to a useful purpose. It’s here that he meets and annoys the sensitive Christopher (Jacob McCarthy). Christopher is different too – he has Asperger’s Syndrome, which means that he’s lacking in social skills and has difficulty understanding other people’s behaviour. Despite Gabriel’s indifferent attitude towards Christopher, the two become friends. They need each other more than they know…
THE VERDICT: ‘The Drummer And The Keeper’ is an impressive, quietly assured feature debut for writer / director Nick Kelly. Anyone who saw his 2010 short film ‘Shoe’ will remember the simple humanity of its message, that of holding on to hope when your life is on the rocks. There’s a similar aspect to his debut here, in that we have two characters who are initially poles apart but find common ground and an urgent need to connect with each other on a human level. How these two very different characters became such close friends is the heart of this involving, well-made film.
Kelly’s script is honest about its two lead characters and where they’re at in their lives. Gabriel needs direction and purpose, Christopher needs independence and understanding. Both of them have parental issues that trouble them, but don’t define their behaviour. Gabriel is quite cruel to Christopher at times, but a grudging respect develops nonetheless. Christopher takes his friendships seriously, even if Gabriel doesn’t. Kelly also takes a non-judgmental approach to their behaviour. Like another fine Irish film recently, Sanctuary, the film is keen to stress the humour and warmth of these characters, whatever their disorders. Nobody’s perfect after all.
The performances are so good here that one hopes that the Irish Film And Television Academy will remember them come next year. Murphy and McCarthy do small wonders with their characters, never betraying the truth of their behaviour or their ambitions. Murphy is given a meatier role here than in the forgettable Black Ice, while newcomer McCarthy has a touch of a young Ethan Hawke about him. They play off each other well, to the point where the acting disappears and they just are the characters. Kelly’s sterling direction is a key factor here in teasing out these performances. ‘The Drummer And The Keeper’ is a lovely character piece built around an unlikely friendship. It’s a keeper for sure and a sign that modern Irish cinema is as strong as ever.
RATING: 4 / 5
Review by Gareth O’Connor

Review by Gareth O'Connor
4
A Keeper