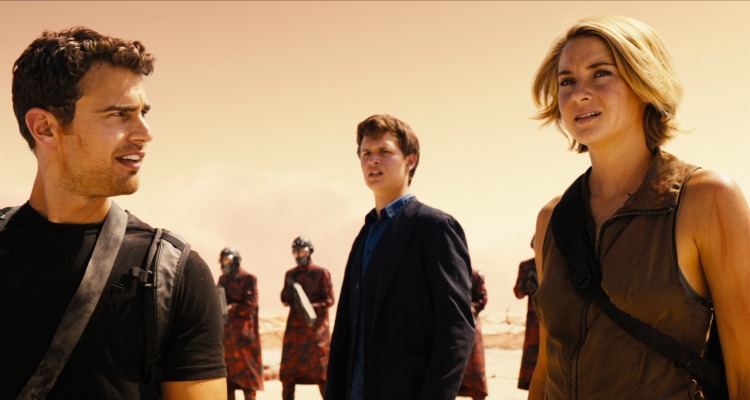 THE DIVERGENT SERIES: ALLEGIANT (USA/12A/121mins)
Directed by Robert Schwentke. Starring Shailene Woodley, Theo James, Jeff Daniels, Naomi Watts, Miles Teller.
THE PLOT: After the death of Jeanine (Kate Winslet), Evelyn (Naomi Watts) puts those loyal to her on trial, while ordering that all gates through the wall to the rest of the world stay closed. Of course, Tris (Shailene Woodley) and her friends are not going to stand for this so after freeing Tris’ brother Caleb (Ansel Elgort) they set out to find out just what is happening outside the city they now know is Chicago. What they find is not quite what they expected, and it soon becomes clear that the leader of this new world David (Jeff Daniels) has more in mind than saving the residents of Chicago from themselves.
THE VERDICT: As with most film series aimed at teens and based on books, Veronica Roth’s final instalment in the ‘Divergent’ series – ‘Allegiant’ – has been split into two films. This first film shares a title with the book – with the final film being titled ‘Ascendant’ – but like most single story books split into two films, ‘Allegiant’ struggles with having too much exposition and not enough doing.
Shailene Woodley, Zoe Kravitz, Naomi Watts, Theo James, Miles Teller and Ansel Elgort all return to the roles they have played throughout the series, and while they do not bring much new to the film, they give solid performances throughout. Jeff Daniels is the major newcomer to the series with the role of David, and although he is an imposing presence, he is never truly given the chance to be menacing or truly intimidating.
From what we see in ‘Allegiant’, it seems that Noah Oppenheim, Adam Cooper and Bill Collage’s screenplay is vastly different to the story told in Veronica Roth’s novel, although the bones of the story remain the same. The screenplay is rather uninspired in terms of dialogue, and gets tangled up in itself toward the end of the second act, but it is just enough to keep the story moving and the audience engaged, while leaving enough unanswered questions that the final film will be able to pick up.
Director Robert Schwentke keeps the fun and the curiosity going through most of the film, but it is when adults come together to bicker politics that the film becomes too caught up in minutiae and begins to slow down. The pacing of the first and final acts of the film is strong, and it is in the fast paced action sequences that ‘Allegiant’ thrives, but the interpersonal relationships with the threat of a new war on the horizon drags the film down.
In all, ‘Allegiant’ is a film concerned with setting up the one that comes after it. The cast do fine and the action sequences are fun, but the politics and rhetoric often overwhelm the fun to be had in the film, dragging it to a crawl. ‘Ascendant’ is sure to be action packed and thrilling, but ‘Allegiant’ is a step down from the fun and engaging films the ‘Divergent’ series has offered so far.
RATING: 3/5
Review by Brogen Hayes

Review by Brogen Hayes
3
No bite