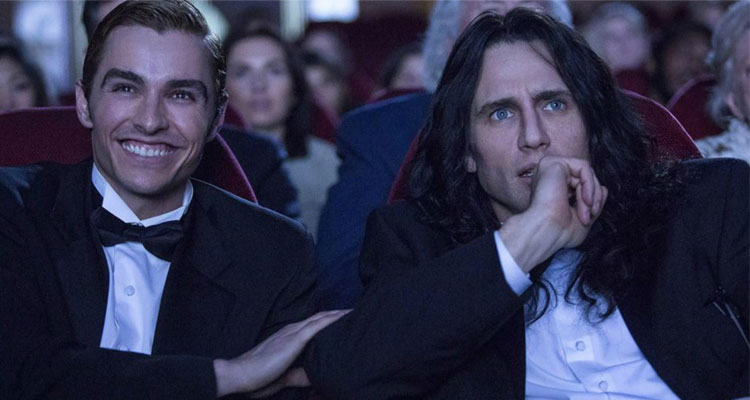 The Plot: San Francisco, 1998. Wannabe actor Greg (Dave Franco) meets the flamboyant, out-there Tommy (James Franco) at an acting class. Tommy has his own idea of Method Acting, being expressive and true to life – well, his life anyway. The two become firm friends and decide that it’s time to hit the bigtime and move to Los Angeles, where nearly everyone is an actor. While Tommy is faced with constant rejection at auditions, Greg has potential. It’s at this point that Tommy decides to throw caution to the wind and make his own movie with Greg. With apparently limitless funds and constant optimism, they set out to make The Room. It’s not an easy shoot, with Tommy clashing with script supervisor Sandy (Seth Rogen). This apparently bad movie might be good after all…

The Verdict: The Disaster Artist is an affectionate tribute to the unfailing spirit of Tommy Wiseau, the creator of The Room – what’s been called the worst film of all time. He’s a spiritual successor to another Hollywood dreamer/loser, Edward D. Wood Jr, whose passion for movies was matched only by his ineptitude at making them. You can certainly see the parallels, but Wiseau is a whole other kettle of fish – or planet as he once refers to.

Beaming down to Planet Tommy for 104 minutes is a joy from start to finish. It’s a singular portrait of a highly eccentric but charming character, driven by his spontaneous attitude to life – just go with the flow and do it. Those early scenes build up the budding bromance between Tommy and Greg, even hinting at a Holmes / Watson-style jealousy when Amber (Alison Brie) enters Greg’s life. But it’s in the later scenes when The Room starts shooting that the laughs erupt like lava. And they keep on coming, to make this possibly the funniest – and most fun – film of the year.

The Disaster Artist is undoubtedly a career high for the Brothers Franco. While they’ve had their own various successes and failures in the industry, they’ve hit upon something unique here that taps into their ability to be both funny and sympathetic at the same time. They’ve never been so good at being bad. Actor/director James Franco has painstakingly re-created unintentionally hysterical scenes from the film – look just before the end credits for a fascinating comparison. The two brothers play off each brilliantly too, with James immersing himself fully into the character (with the aid of some prosthetics), while Dave gets the slightly dim bulb aspect of Greg just right.

Tommy Wiseau was a loser who never stopped dreaming, even when reality came crashing in. Although it only played in one cinema, The Room went on to become a cult hit on the midnight movie circuit and is now ripe for rediscovery. For a film about a loser, The Disaster Artist is nothing but a winner. It achieves a near-perfect balance of humour, heart and respect for its characters. We laugh at them, but they’re laughing at themselves too. It’s a rib-tickling triumph for all concerned, but particularly for the multi-talented James Franco. Stay to the very end of the credits for an extra treat.