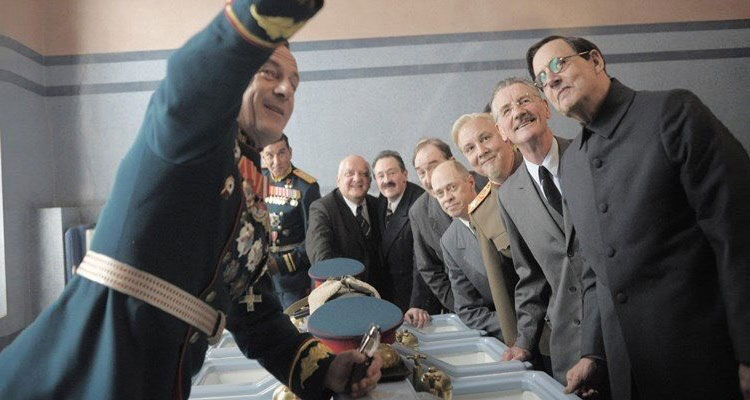 The Death of Stalin

THE DEATH OF STALIN (France|UK/15A/106 mins)
Directed by Armando Iannucci. Starring Steve Buscemi, Jeffrey Tambor, Simon Russell Beale, Jason Isaacs, Michael Palin, Paddy Considine, Andrea Riseborough, Olga Kurylenko.
THE PLOT: Russia, 1953. The country is held in the iron grip of Josef Stalin. Terror is on streets, as names are rounded up for execution by the ruthless, monstrous Beria (Simon Russell Beale). In the midst of this glorious time for the Motherland, Stalin is as much hated as he is loved by the people and those political snakes around him, which include Khruschev (Steve Buscemi), Malenkov (Jeffrey Tambor), Molotov (Michael Palin) and bullish General Zhukov (Jason Isaacs). When Stalin collapses and dies soon after, there’s a scramble for power. Only those ruthless enough to survive will climb to the top…
THE VERDICT: Having tackled Whitehall with ‘In The Loop’ and Washington D.C. with ‘Veep’, Armando Iannucci turns his beady, satirical eye on Stalinist Russia. It’s an ideal fit for him, given both the absurdity and horror left in the political vacuum caused by Stalin’s death. His co-written script is based on the comic book of the same name by Fabien Nury and Thierry Robin. There are more than a few attempts at comic book-style humour, with buffoonish behaviour early on by the main political players.
An early scene involving Comrade Andryev (Paddy Considine) as he attempts to record a concert involve getting people off the streets to fill seats and ensure the acoustics are right – otherwise Stalin will have his head. Later on, Michael Palin delivers a committee-meeting speech that is very Monty Python. Yet, the slyly satirical humour is cautiously advanced to the audience – daring them to laugh at times of murder, backstabbing and political machinations. The blood running through the veins of this film is midnight black and sharply observed. The excellent script is so delicately balanced, consistently funny and thought-provoking that it must surely deserve some sort of awards nomination.
The actors rise to the challenge of the fruity, sweary script. Never mind the mix of non-Russian accents – it’s not important when each character is fleshed out in such colourful detail. The stand-out is Beale, who barks out execution orders like he was sending out for groceries. It’s that everyday mundanity of evil that really strikes a chord, when absolute power corrupts absolutely. It’s a chilling performance, true to the notorious sexual predator Beria. Each character is self-serving in their own way, as they try to outmanoeuvre each other in their succession attempts. It’s hilarious to watch, while quite troubling to think about too.
‘The Death Of Stalin’ walks a fine line between outright humour and the scale of human horror, but does it so skilfully that it becomes a powerful indictment of that dark era in Russian history. The Kremlin is unlikely to be impressed, but Iannucci should be congratulated for being so daring and so perceptive in his satire. A resounding success, comrades.
RATING: 4 / 5
Review by Gareth O’Connor