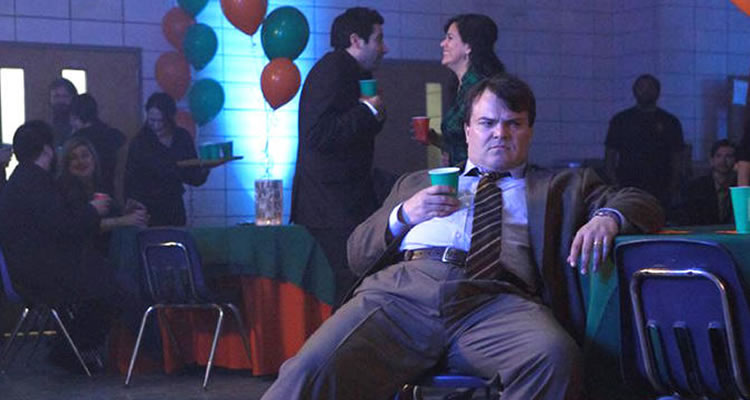 THE D TRAIN (UK | USA/15A/101mins)
Directed by Jarrad Paul & Andrew Mogel. Starring Jack Black, James Marsden, Kathryn Hahn, Jeffrey Tambor, Mike White
THE PLOT: Dan (Jack Black) is a man who has been settled in his suburban life since he left college. Married with two lovely children, but saddled with a job that seems to be stuck in a bygone era, Dan throws all his energy into making his 20 year high school reunion the best it can be. The trouble is that almost all of his former classmates are determined not to attend, so when Dan spots Oliver Lawless (James Marsden) in a TV commercial, he sets out to get him to attend the reunion – and convince everyone else to go – no matter the cost.
THE VERDICT: Although it is billed as a comedy, ‘The D Train’ feels rather more like a mid life crisis drama, with some awkwardness and chuckles thrown in. Jack Black is on fine form as the mild mannered and rather lost Dan; it seems that he does not quite know how he found himself so deep in suburbia, and hankers for everything in his life to be perfect. Although Dan makes some pretty questionable choices throughout the film, Black always manages to keep audience sympathy with the character as his life spirals out of control. Black also manages to make the rather twee ending almost work, and showcases his ability to mix comedy and drama throughout ‘The D Train’.
James Marsden, as the handsome and seemingly successful Oliver Lawless brings charm and a desperation to the role. Lawless seems to have his life together in a way that Dan does not, but it soon becomes clear that Dan is simply raising Oliver onto a pedestal. Marsden keeps the character grounded and allows the audience to see the pain and struggles that Dan cannot. Jeffrey Tambor has a small but perfectly timed performance as Dan’s boss Bill, and Kathryn Hahn plays Dan’s wife Stacey.
Screenwriters Jarrad Paul and Andrew Mogel have tried to create a dark comedy about a mid life crisis in’ The D Train’, but leave the comedy to fall by the wayside in this examination of love and expectations. The script is carried by the performances from the cast and, although there are some twists and turns throughout the film, it seems that the writers had a strong idea for the film, but no real idea how to end their story.
As directors Mogel and Paul are competent for the most part, but the film struggles through some uneven pacing, and has a rather odd tone from time to time. The actors are well directed, so the issues in the film seem to stem from an uncertain script, rather than weak direction. Elsewhere however, Andrew Dost of Fun.’s soundtrack is infectious and catchy.
In all,’ The D Train’ could well be a strong examination of the crises we find ourselves facing in life, and the nature of love. Due to a muddled script and some messy pacing however, the film is less than the sum of its parts. Black, Marsden, Tambor and Hahn are on fantastic from however, and a stronger script and a stronger ending could have made ‘The D Train’ a great film instead of a good one.
RATING: 3.5/5
Review by Brogen Hayes