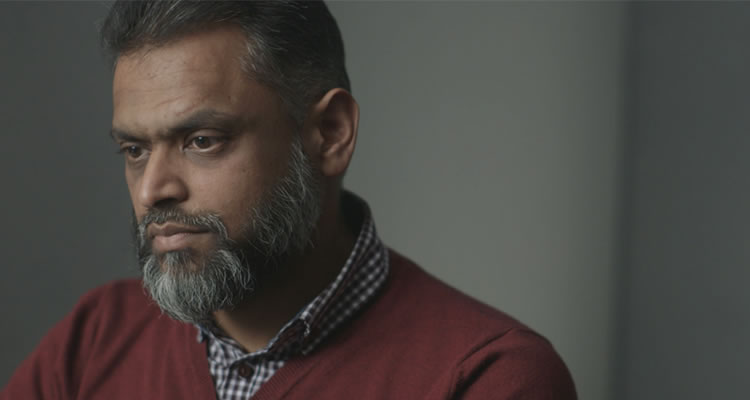 The Confession: Living the War on Terror

THE CONFESSION: LIVING THE WAR ON TERROR (UK/TBC/96mins)
Directed by Ashish Ghadiali.
THE PLOT: British Muslim Moazzam Begg spent two years detained in Guantanamo Bay before being released without charge. For the first time and in great detail, Begg tells his story to filmmaker Ashish Ghadiali.
THE VERDICT: The story of Moazzam Begg is an interesting one, and as the documentary unfolds, the parallels between Begg’s life and the lives of Muslims around the world become clear. What does not become clear however, is how this articulate, smart, outspoken and charming figure could not see that his actions and movements have led to a light being shone upon him, and just how he is rather emotionless about the ordeal he talks about throughout the film.
Begg begins his story with a familiar tale; one of a second generation English Pakistani man trying to find where he belongs in the world. Is he British? Pakistani? Muslim? Asian? This topic has been covered numerous times in cinema over the years – a particular standout being ‘La Haine’ – but what we have not seen before is a man believing all his questions are answered through Islam, and his choice to travel to some of the most dangerous areas of the world.
What becomes clear throughout ‘The Confession: Living the War on Terror’, is how smart and self censored Begg appears to be. There is very little emotion from this central interviewee as he tells his story about mistreatment and detention for what he believes to be his faith and the way he looks. As well as this, it seems as though Begg is telling only one side of the story, and while this may be his story, he gets off rather lightly from filmmaker Ashish Ghadiali, who seems sceptical once or twice, but never really pushes any line of questioning.
There are interesting questions raised about choices made by Western powers in the past, and how these choices have influenced not only the West but the Middle East as well, but these are never truly answered – other than by Begg – so there are times when the film feels unsatisfying; there is only one side of the story here, not an engaging and rounded discussion. As well as this, there are times when the film is badly paced at times, and the thread that holds the film together often seems to disappear completely.
In all, Moazzam Begg is an interesting interviewee, but it seems that director Ashish Ghadiali often lets him away too lightly with his line of questioning. There are some interesting issues raised throughout the film, but without a rounded discussion, the audience never gets what feels close to the real story.
RATING: 3/5
Review by Brogen Hayes

Review by Brogen Hayes
3
One Note