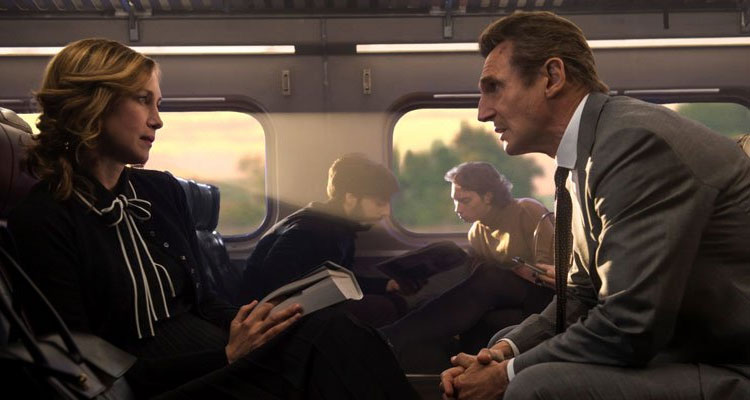 The Plot: Former cop Michael (Liam Neeson) is an insurance businessman who takes a daily commuter train into and out of Manhattan. This particular day started out like any other, but it won’t end the same way. First, he loses his job five years from retirement and faces the prospect of telling his wife Karen (Elizabeth McGovern). While on the train home, he’s approached by Joanna (Vera Farmiga) with a proposition. If he can identify a target on the train and carry out a simple action, then he’ll receive a large monetary reward. Michael hesitantly accepts, not quite believing it to be true. With his knowledge of the familiar faces on the train, he sets out to identify this one person but is soon drawn into a criminal conspiracy…

The Verdict: Liam Neeson’s surprising but welcome late-career renaissance as a man of action shows no signs of slowing down just yet (he was a potential Bond at one stage). A sprightly 65, he’s re-teamed with director Jaume Collet-Serra for the fourth time for The Commuter. It’s a slight twist on their earlier film Non-Stop, set in a confined space and seeing Neeson getting into fisticuffs with younger men and showing them how it’s really done (of course).

In other hands, this could have been a run-of-the-mill thriller but the combination of Collet-Serra and Neeson elevates it a bit more. They obviously have a shorthand working together and it shows in the well-staged fight and action sequences. There’s a particularly bone-crunching fight at close quarters later in the film which suggests that Neeson has a few more years to go before he plays kindly grandfather types. The film sees Michael moving in, out and under the train with a kinetic energy so it never feels stagey.

The mechanics of the plot aren’t exactly startling, being essentially a whodunit mixed in with some Cassandra Crossing-style suspense and intrigue. However, the plot is actually reasonably good and stays on track right through to its action-packed finale. Collet-Serra keeps things moving at a brisk pace and the film doesn’t overstay its welcome. A solid supporting cast of familiar faces (including some other Irish and British actors) rounds things off for an entertaining and mostly satisfying thrill ride that keeps you guessing and on your toes. The Commuter is an agreeable actioner worth hopping onto for a ride on a Friday or Saturday night.