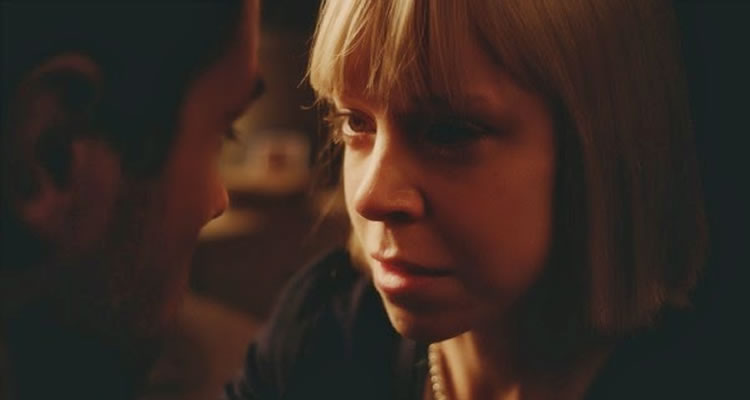 With THE CANAL, Antonia Campbell-Hughes adds another dark, twisted tale to her burgeoning CV. “Dark is where the real drama happens,” the Irish actress tells Movies.ie

It’s difficult to equate the shy, giddy Antonia Campbell-Hughes that I meet in the flesh at Dublin’s Merrion Hotel to the strange, beguiling creatures she often plays on screen. From the sexual sadism of KELLY + VICTOR (2012) and the troubled dreams of THE OTHER SIDE OF SLEEP (2011) to the quiet desperation of FIVE DAY SHELTER (2010) and the true-life kidnap cruelty of 3097 DAYS (2013), as an actress, Campbell-Hughes is clearly drawn to the dark side. Heck, director Jonathan Glazer even had to sneak Campbell-Hughes into an early scene in his menacing alien black widow tale UNDER THE SKIN, just to make sure we all knew where this film was headed.

Not that it’s all doom and gloom. There’s still room for a bonkers comic creation such as the Ferne Cotton-esque Bluebell Welch, the zany-verging-on-mentally-challenged 2009 MTV presenter conceived and played by Campbell-Hughes, but, bejiggers, there’s a heck of a lot of soul mining and hair-raising in this slight young artist’s back catalogue.

“Well, dark is where the real drama happens,” smiles Campbell-Hughes, after we go find an abandoned conference room in the bowels of the Merrion. “I don’t think about whether a project is dark or not though; I just look for the interesting story, and the interesting characters. And, truth be told, there aren’t many great stories that exist purely in the land of sunshine and laughter.
“So, I don’t think it’s any great need on my part to satisfy my black heart – it’s just trying to satisfy this need in me to be part of stories that have something to say.”

We’re here to talk about Campbell-Hughes’ latest offering, THE CANAL, a psychological thriller dressed up as a supernatural thriller from rising young Irish filmmaker Ivan Kavanagh. The plot sees happy loving couple David (Rupert Evans) and Alice (Hannah Hoekstra) moving into their new home just as the former begins suspecting that the latter is having an affair. A film archivist, when David is handed a reel of footage concerning his new abode by his assistant Claire (Campbell-Hughes), he discovers that his dream home was once a place of nightmares, having been the setting of a brutal murder in 1902. Still, who has time for an otherwordly curse when your wife might be cheating on you…?

“There’s so much going on beneath the surface with a film like this,” offers Campbell-Hughes. “I think Ivan is just incredible, and someone who has already made some incredible films – TIN CAN MAN, THE FADING LIGHT, etc – but, more importantly, you just know he’s going to make even more incredible films in the future. As an actor, you want to work with people like this, who have a real love for what they’re doing.
“Oh, and being enormously talented helps too, of course. Which Ivan clearly is. Hollywood are all over him now, after THE CANAL.”

Having gone down rather well at Frightfest – the UK’s largest international genre film festival – last August, THE CANAL immediately won Kavanagh new fans in the critical community, and new best friends within the studios. He’s currently working on two separate Hollywood projects.
“I really believe that if you do good work, it will lead to more work,” says Campbell-Hughes of Kavanagh’s success. “Why would you gamble everything on a commercial break when you don’t actually like the work itself? You see that happen again and again, where someone lowered their standards and raised their expectations only to fall flat on their face. It also means your career starts going backwards, and it can take a lot to bounce back from a box-office-chasing flop.
“With interesting work, even if it doesn’t break out and become a major hit, it’s still interesting work. It will still be watched six months from now, ten years from now. That’s the kind of film you want to be involved in, the kind of work you want to have on your CV. And not just so you can build a career, but just to have a good feeling about getting out of bed at 4am, to go and wait for six hours before the day’s first shot is done. What makes it all worthwhile, and even enjoyable, is the fact that you’re aiming for something great, something special. And when you get something great, something special – and, of course, that doesn’t happen every single time – that’s a feeling that no amount of money in the bank or cover stories in magazines could ever even compete with.”

“Yeah, busy, but happy,” finishes Campbell-Hughes. “I’m very much used to the nomadic lifestyle that this kind of work begins, but I’ve also rediscovered my Derry roots lately, and that’s given me a real sense of home. Which has been incredible. It’s so important to have somewhere familiar and warm and welcoming to go to after a shoot.
“Especially when you keep going down dark rabbit holes like THE CANAL…”