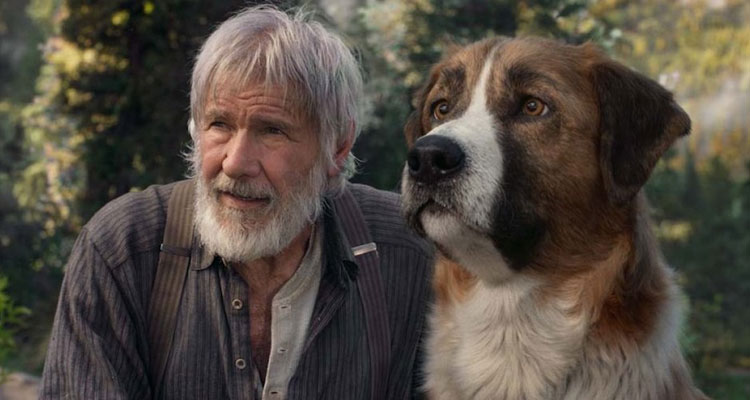 The Call Of The Wild

In short: Answer the call

The Plot: Buck, a half St Bernard and half Scotch shepherd dog, is too active for his own good. He has a habit of getting himself into trouble, even if he doesn’t mean it. Domesticated life is just too sedentary for him. When he’s taken by gold prospectors to Alaska and then the Yukon territory, he’s put to work as a sled dog under the kindly hand of Perrault (Omar Sy). A strong and strong-willed dog, he soon earns the respect of his fellow sled dogs and becomes their leader. Over time, he comes into the hands of former prospector John (Harrison Ford). John is mourning the loss of his son and is seeking solace in the wild. The pair soon come to understand each other’s needs…

The Verdict: Family adventure films often fall into two categories: the ones that are merely going through the motions to keep children in their seats and attempt to keep half-bored adults from rolling their eyes; and the ones that try harder to bring everyone on board by not dumbing down the material and deliver something worthy. The Call Of The Wild very much falls into the latter category. It’s based on Jack London’s 1903 novel, which focused not so much on a human adventure but a canine one. Older viewers may remember a previous Jack London adaptation – 1991’s excellent White Fang, which featured a young Ethan Hawke. The Call Of The Wild is a similar story, but viewed from the perspective of the dog, Buck.

Having directed a number of animated features, Chris Sanders makes his live action debut here. He’s a good fit for the material, as his animation experience comes into play. Given the amount of physical work involved for Buck – pulling sleds, jumping into water rapids, fighting for survival in the wild – any trained dog would have to be the canine equivalent of Dwayne Johnson to do this film. Hence, Buck is a CGI creation based on Sanders’ own dog. While that fakery initially seems offputting for a film that revels in its realism and snowy environments, it does grow on you. Harrison Ford may get top billing, but the real stars of the show here are the computer boffins who brought Buck to vivid life. He’s a lively character with a lot of personality, strength and courage. Casting Ford opposite him, it’s not hard to imagine that Sanders and his team had a Han / Chewie parallel in mind.

Sanders and his screenwriter Michael Green open out the story with each act, leading to some welcome character development for both Buck and John as they go through their own trials. Sanders wisely decided not to let us hear Buck’s thoughts, using Ford’s narration at select points. We’ve had a lot of films recently where dogs seem to be going through some sort of existential crisis about their human owners. Buck doesn’t need that, thanks to the animators doing their jobs. Some of the human characters are lacking software though – Dan Stevens’ snivelling, boo-hissable prospector is one-note. At least he doesn’t use his English accent to compound it. That aside, there’s much to enjoy here from the canine humour to Ford’s presence to the stunning Yukon and British Columbia locations. The ecological message, about respecting and enjoying the natural world which we often take for granted, is done in a subtle way. It’s an agreeable family adventure film that rightfully got a round of applause at this reviewer’s screening. The Call Of The Wild is worth answering.