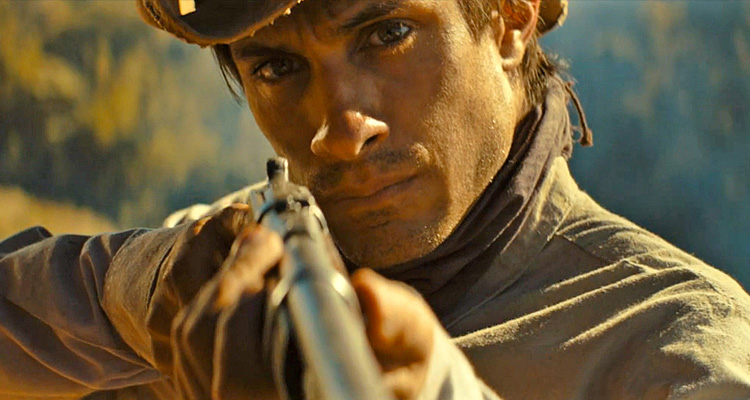 THE BURNING (EL ARDOR) (Argentina | Mexico | Brazil | France | USA/16/101mins)
Directed by Pablo Fendrik. Starring Gael Garcia Bernal, Alice Braga, Jorge Sesán, Chico Díaz, Claudio Tolcachir, Julián Tello, Lautaro Vilo, Iván Steinhardt.
THE PLOT: As a group of nomads for hire begin to burn the forests of Argentina, Vania (Alice Braga) and her father begin to fear for their safety, as there have been numerous attacks on their land. When Kai (Gael Garcia Bernal) walks onto their farm unannounced, Vania believes that this man has come to help, but doesn’t yet realise how bloody the road to salvation will be.
THE VERDICT: THE BURNING premiered at the Cannes Film Festival last year, and tries to be a tale about the clash between two ways of life; between the physical and the metaphysical; the peaceful and the violent.
Gael Garcia Bernal and Alice Braga do well in their roles; the film is mostly about trying to solve the mystery of who Kai is, but it also focuses on the fact that we are forgetting the old ways of life, and Bernal straddles the line between these well. Braga is fearsome and vulnerable in her way and the two work well on screen together. The rest of the cast is made up of Jorge Sesán, Chico Díaz, Claudio Tolcachir, Julián Tello, Lautaro Vilo and Iván Steinhardt.
The story, written by Pablo Fendrik attempts to throw the difference between country and city living into relief on screen, and succeeds for the most part, but is when a jaguar (referred to as a tiger) consistently reappears throughout the movie that things get messy. There is the idea that the gods of the river are protecting the faithful and the peaceful – with the jaguar doing a lot of the dirty work – but this all falls by the wayside for the final set piece, which sees The Burning turning into a Western, complete will tolling bell and cowboy hats. This is not only jarring, but it feels like the wrong choice for a film that has been setting up the idea of the otherworldly from the outset.
As director, Pablo Fendrik allows the film to be a slow burn, but it is not long before this slow burn turns into downright heel dragging, meaning the pacing drops and the 101 minute running time suddenly feels a helluva lot longer. As well as this, the entire affair is rather predictable, with very few surprises to keep the audience engaged.
In all, THE BURNING has strong performances from Gael Garcia Bernal and Alice Braga, but with its muddled story and painful pacing, it turns from a thriller about survival to a slightly metaphysical tale starring Garcia Bernal as a modern Mowgli.
RATING: 2/5
Review by Brogen Hayes