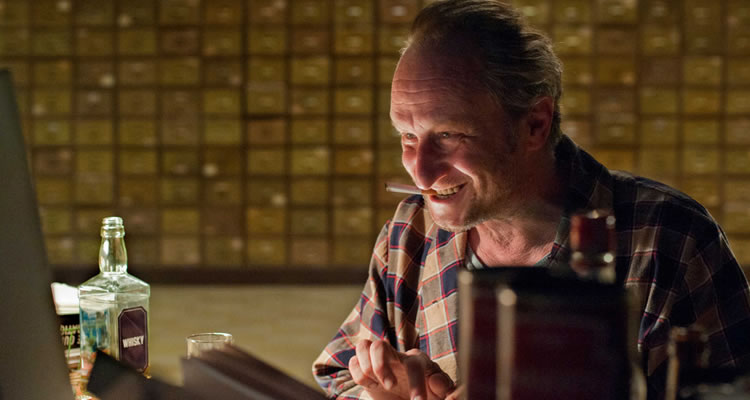 THE BRAND NEW TESTAMENT (Belgium | France | Luxembourg/TBC/113mins)
Directed by Jaco Van Dormael. Starring Pili Groyne, Benoît Poelvoorde, Catherine Deneuve, François Damiens, Yolande Moreau.
THE PLOT: God (Benoît Poelvoorde) exists, and he lives in Brussels; he is arrogant and rather cruel to humanity, as well as his wife and daughter Ea (Pili Groyne), so the 10 year old girl sets out to make a few changes. After consulting with her older brother JC (David Murgia) Ea sneaks into her father’s office, releases important information to mankind, and sets out to gather six apostles, with the hopes of making some changes.
THE VERDICT: A far cry from Nietzsche’s assertion that “God is dead. God remains dead. And we have killed him”, Jaco Van Dormael’s film sets out to prove that God is alive and well, and playing with humanity for his own selfish fun. This an absurdly comic look at what would happen if someone rebelled against God’s seemingly random acts of cruelty, and tried to make life better.
Pili Groyne leads the cast here as the daughter of God, Ea. Groyne makes the character gentle and caring – the way many imagine their god to be – and someone who has a genuine interest in humans and life on Earth. Groyne also makes the earnest and intense 10 year old girl wonderfully odd, but with a sense of fun and fate that makes the character work. Benoît Poelvoorde plays an arrogant and angry God, with Yolande Moreau taking on the role over the bullied wife of God. Catherine Deneuve, François Damiens, Laura Verlinden, Serge Larivière, Didier De Neck and Romain Gelin make up Ea’s choices for Apostles, and Marco Lorenzini plays Victor, the man Ea tasks with writing the new testament she has set out to create.
The screenplay, written by Jaco Van Dormael and Thomas Gunzig is a darkly comic look at those with god complexes, and just what people do with ultimate power. There is the idea that ultimate power corrupts, as well as the notion that God created us just to play with us because animals didn’t seem right in the big city. The story follows some of the ideas of theBible, with Ea spending time with each of her chosen Apostles, not to preach at them, but to help them to see there is a different way for them to live their lives and, in a particularly engaging move, have her hear the inner songs of the people she meets. The screenplay is also caustic and damning of the idea of a higher power in general, and will certainly please those of us who often wondered how things would be different if God were in fact real, and if she were a woman instead.
Director Jaco Van Dormael makes sure that the audience sympathy lies with Ea throughout the film; although she makes some bad decisions, she makes them for the right reasons in her quest to help humanity. The pacing of the film is steady throughout, and even though it begins to stagger slightly about half way through the 113 minute running time, ‘The Brand New Testamant’ soon recovers, bring the film to an absurd, heartwarming and hilarious ending. There are questions asked and answered throughout the film, making this metaphysical dark comedy feel as though it was written by Charlie Kaufman, as it explores just what it is to be human, and our relationship with life and death.
In all, ‘The Brand New Testament’ is absurd, quirky and funny on the surface, but has a strong message and a dark core, with which it fires shots at the established ideas of God and religion as a whole. The cast, particularly Pili Groyne, are superb and, a slight drop in momentum aside, the film is well paced, engaging and thought-provoking.
RATING: 4.5/5
Review by Brogen Hayes