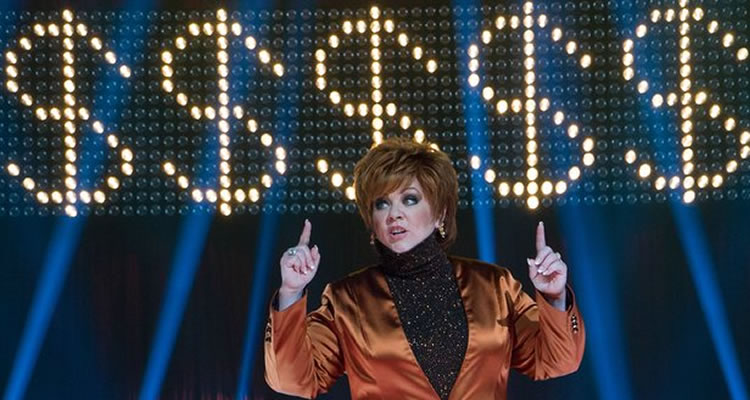 THE BOSS (USA/15A/99mins)
Directed by Ben Falcone. Starring Melissa McCarthy, Kristen Bell, Peter Dinklage, Annie Mumolo, Kristen Schaal.
THE PLOT: In and out of foster care, Michelle Darnell (Melissa McCarthy) had a troubled childhood, but reinvented herself as a success guru in her adult life. When former flame Renault (Peter Dinklage) turns her into the police for insider trading, Michelle must find a way to get back to the top, with the help of her former assistant Claire’s (Kristen Bell) skills at baking.
THE VERDICT: “My name is Michelle Darnell, and I am the wealthiest woman in America”. So begins ‘The Boss’, with McCarthy lowered from the ceiling at a pop star-esque conference before rapping and dancing with T-Pain. If this sounds like standard McCarthy comedy fare, that’s because it is in some ways, but it is also the best comedy we have seen from the actress in some time, perhaps because she obviously revels in playing the villain for once.
McCarthy is on top form as Michelle Darnell, with script and improvisations on set working well together, and some of the trademark awkwardness we have come to expect from McCarthy’s characters being toned down. As well as this, McCarthy obviously has fun with playing a slightly darker, more selfish character, and this works well for the movie. Kristen Bell plays the sweet character to McCarthy’s selfish one; Claire is a single mother struggling to make ends meet after Michelle is sent to prison, and makes the character warm and gentle. It is the relationship between Claire and Michelle that makes the film work as well as it does, and the two actresses have great chemistry together. Elsewhere, Peter Dinklage plays Renault; former lover of Michelle, turned worst enemy. Dinklage tries his best with the role, but it is becoming more and more clear that he is not a strong comedic actor. Still, Dinklage is always a joy to watch on screen, even in his weaker, smaller roles. The rest of the cast features ‘Bridesmaids’ co-writer Annie Mumolo, Kathy Bates, Kristen Schaal and Cedric Yarbrough.
Husband and wife writer team Ben Falcone and Melissa McCarthy are joined this time by Steve Mallory, in his first writing credit, and the three do well enough with the screenplay. There are some great jokes and strong pacing, although these are mixed with odd jumps through the story and a story that becomes more than a little predictable at times. Michelle pushing people away because she was pushed away as a child is a plot device the audience can see coming within the opening moments of the film, and the tone often shifts from over the top comedy to calmer family tale with little warning, meaning the film feels disjointed at times. The dialogue is where the film shines, however, and it makes good use of the entire cast’s acting and comedic timing.
Director Ben Falcone makes great use of the cast, and there is strong chemistry and great timing between Bell and McCarthy that makes the film work. The pacing is steady for most of the film, although some clunky edits and decisions to skip some situations that could have been mined for comedy feel strange.
In all, ‘The Boss’ has problems, but is one of the funniest comedies Melissa McCarthy has produced in a long time. The actress obviously revels in playing a nastier character, and pairing her with Kristen Bell is a stroke of genius. It’s just a shame that an uneven performance from Peter Dinklage, some strange edits and messy pacing drag this film down from great to good.
RATING: 3/5
Review by Brogen Hayes