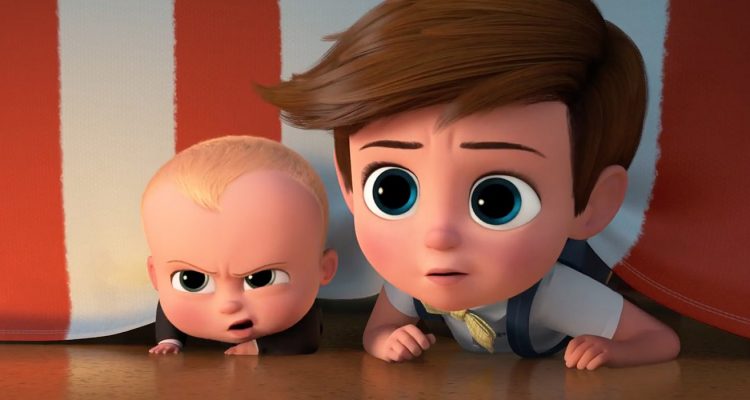 THE BOSS BABY (USA/G/97mins)
Directed by Tom McGrath. Starring Alec Baldwin, Lisa Kudrow, Steve Buscemi, Jimmy Kimmel, Tobey Maguire.
THE PLOT: Seven year old Tim (Miles Christopher Bakshi) is an only child, and is used to getting all of his parents’ attention, as well as three bedtime stories, five hugs and his special song – Blackbird by The Beatles. When Tim hears he is to get a new baby brother he is less than impressed, and when the baby (Alec Baldwin) arrives he knows there is something off about this new kid; he turned up wearing a suit and carrying a briefcase. Tim’s efforts to find out the truth just lead to conflict, however, and it is not long before he hatches a plan to get rid of the interloper once and for all.
THE VERDICT: Loosely based on the book by Marla Frazee, ‘The Boss Baby’ is a comic animation that plays with imagination and adventure, but the real gag is a baby being voiced by Alec Baldwin – known for his gravelly tones – and once that gag lands, the film begins to run out of steam.
As mentioned, Alec Baldwin leads the cast as the Baby, and he is on fine form; charming, tyrannical and funny, the Baby certainly feels like a newborn Jack Donaghy – the character that Baldwin played so well in 30 Rock – and it is he who carries the film on his shoulders. The rest of the voice cast do fine in their roles, a cast that features Tobey Maguire, Steve Buscemi, Lisa Kudrow, Jimmy Kimmell and Miles Christopher Bakshi, but this is well and truly Alec Baldwin’s film.
The screenplay, adapted from Marla Frazee’s book by Michael McCullers, plays with the idea that a new baby in a home is always going to be in charge, and older siblings often have a hard time adapting to these infant interlopers. This is an interesting element to the story, except it is quickly shoved aside when it is made incredibly plain that this baby is the Boss, and not just the Boss of the Templeton home. There are gags throughout the film that mainly work because of Alec Baldwin’s voice work, but the reason why the Baby comes to the family is not as satisfying as the writers might think, and the film begins to run out of steam when Tim and the Baby become allies instead of enemies.
Director Tom McGrath plays with different styles of animation throughout the film, and obviously has fun with the imagination heavy sequences of the film, and while the voice performances are strong, McGrath struggles to keep the pace and audience interest going when the adventure section of the film takes hold. The pacing is rather loose throughout, and although the film tries its best to take leaves from Pixar’s book, references to Indiana Jones, Mary Poppins, Toy Story and Batman and Robin leave ‘The Boss Baby’ feeling rather familiar and uninspired.
In all, ‘The Boss Baby’ starts off strong but once the joke of Baldwin voicing a baby lands, the film begins to run out of ideas and steam. There are laughs and fun to be had with the film, but in the end, ‘The Boss Baby’ feels rather familiar and uninspired.
RATING: 3/5
Review by Brogen Hayes