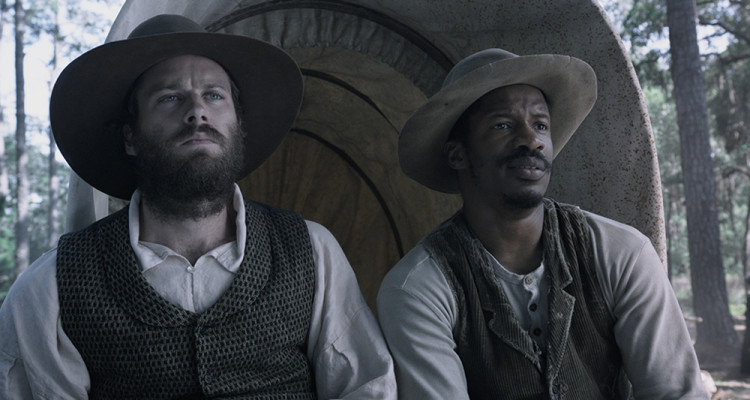 The Birth of a Nation

THE BIRTH OF A NATION (USA/15A/120mins)
Directed by Nate Parker. Starring Nate Parker, Gabrielle Union, Armie Hammer, Jackie Earle Haley, Aja Naomi King
THE PLOT: In Virginia, before the US Civil War, Nat Turner (Nate Parker) a slave owned by the relatively lenient Samuel Turner (Armie Hammer), leads a short lived rebellion against slavery after he sees too much cruelty visited on his kinsmen.
THE VERDICT: ‘The Birth of a Nation’ is a strange sort of film; presented as the story of a man who wanted to right wrongs, the film is based on the life of Nat Turner, a man who reportedly saw visions and whose spirituality and religion juxtaposed with the murders he instigated and carried out has been compared with that of modern day religious violence. As well as this, the film has been shrouded with controversy since it was first screened at Sundance earlier this year, and with a title taken from DW Griffith’s film of the same name, it seems what writer / director Nate Parker, and co-writer Jean McGianni Celestin wanted to court that controversy in some ways.
Nate Parker has cast himself in the lead role of Nat Turner, and it is often hard to tell if Parker is a strong actor or not. Parker’s portrayal of Turner swings from him being meek and gentle, to violent and vitriolic, to seemingly mentally incapacitated, often within one scene. Armie Hammer does a lot better with the role of Samuel Turner, and the character’s progression on screen is arguably the most interesting thing about the film. The rest of the cast features Jackie Earle Haley, Penelope Ann Miller, Aja Naomi King and Gabrielle Union.
There has been a lot of talk about Nate Parker and Jean McGianni Celestin’s screenplay for ‘The Birth of a Nation’, and although there are changes made from the real life Nat Turner’s life, the most troubling thing about the screenplay is it’s languid, slow pacing. There are scenes of great violence – although what could be considered one of the most upsetting scenes takes place off camera – but the greatest crime that ‘The Birth of a Nation’ commits is being dull. Much of the film is taken up with Nat Turner witnessing events of great cruelty and oppression, but although the audience may turn away at the representation of this on screen, Turner does not seem greatly affected by what he sees while touring the county as a preacher, until violence comes to call on his own door, then everything changes. As well as this, it seems as though we do not really ever get a chance to know Nat Turner as a character, although the choice to reduce the man’s religious predisposition from what is known of the real man is probably a wise choice.
As director, Nate Parker should not have cast himself in the lead role; not only is Turner the least interesting character on the screen, but it is obvious that Parker did not give enough consideration to his co-stars. As well as this, the film is badly paced and slow, with not enough focus being given to the short-lived rebellion nor its aftermath.
In all, ‘The Birth of a Nation’ is a mediocre film about a man who tried and failed to instigate change. There are issues with pacing and performance in the film, but the main crime ‘The Birth of a Nation’ commits is being dull. Controversy has definitely been courted with The Birth of a Nation, but drawing ironic parallels with DW Griffith’s is indulgent and unnecessary, and the controversy that has sprung up around the film is unlikely to encourage many to see it.
RATING: 2/5
Review by Brogen Hayes