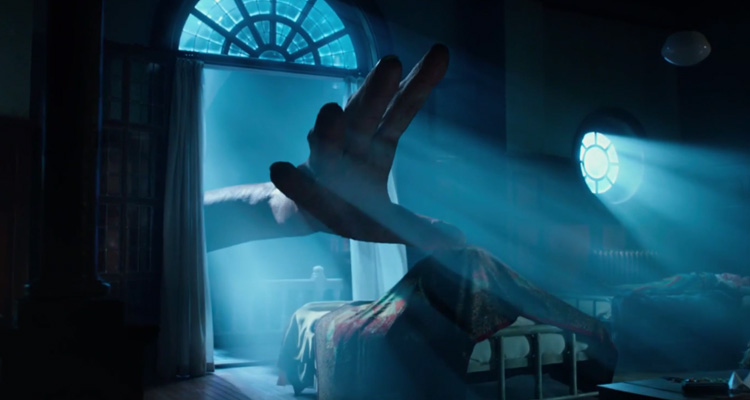 THE BFG (UK | Canada | USA/TBC/115mins)
Directed by Steven Speilberg. Starring Mark Rylance, Bill Hader, Jemaine Clement, Ruby Barnhill, Rafe Spall, Rebecca Hall.
THE PLOT: “Don’t get out of bed. Don’t go to the window. Don’t look behind the curtains” Sophie (Ruby Barnhill) reminds herself every night during Witching Hour – which she alone knows comes at 3am – but the night she can’t help herself is the night she sees something that changes her life forever; a giant. The BFG (Mark Rylance) snatches Sophie from her home at the orphanage and takes her to Giant Country, where he shows her all manner of marvellous things, but there are more giants than the big friendly one, and the two new friends must come up with a plan to stop them from eating human beings.
THE VERDICT: ‘The BFG’ is based on the children’s book of the same name by Roald Dahl, and transports the audience back to the time that is was published in 1982. Of course, this is a world created by Roald Dahl, so while we may remember the time, director Steven Spielberg has been sure to make The BFG look like a world created by Dahl; magical, strange and just a little bit scary.
Ruby Barnhill leads the cast as Sophie, and does incredibly well with the role. Sophie is precocious, demanding and curious, and while she makes The BFG’s life better, it is she who learns a multitude from him. Barnhill makes Sophie a strong central character and ones who fans of the film will find themselves wishing they could trade places with, so they too can go on their own adventure. Mark Rylance towers over the rest of the film – both literally and figuratively – as the big friendly giant. Rylance has fun with the BFG’s idiosyncratic and charming way of speaking, his emotion and warm heart, making him the heart and soul of this film as well. The rest of the cast features Rebecca Hall, Rafe Spall, Jemaine Clement, Bill Hader, Adam Godley, Daniel Bacon and Penelope Wilton who gets a promotion from her role as Harriet Jones, Prime Minister in ‘Doctor Who’, to Queen of England in ‘The BFG’.
The screenplay, written by Melissa Mathison, is incredibly faithful to Roald Dahl’s book, keeping in all the wonderful turns of phrase from the BFG himself, the resolution and crucially, keeps it set in England. There are times where the film feels a little trite, but this could be the fault of an audience jaded by big stories playing out in a big way. Director Steven Speilberg not only coaxes great performances from his actors, but keeps the tone light and charming, as well as pacing the almost 2 hour running time well that the lags in energy feel like mere dips, as opposed to crashes. As well as this Speilberg puts his trademark sense of wonder and nostalgia onto the film that will skim over kids heads, but will certainly make adults nostalgic for the time they first read Dahl’s book.
Elsewhere, the design of the film is smart, with ‘The BFG’ using ordinary objects in extraordinary ways, and although we may have seen better CG in other projects, ‘The BFG’ is realised well and any imperfections can be ignored since the character is so endearing, and he is supposed to look a little otherworldly after all.
In all, ‘The BFG’ is a fun film for the whole family. Adult fans of Roald Dahl will be swept away in a wave of nostalgia and fun, and younger fans and newcomers will be delighted at the detail used in bringing this story to the screen. The cast are strong, with Mark Rylance standing head and shoulders above the rest as the warm, gentle and thoroughly human BFG. There are issues with pacing from time to time, however, and at 115 minutes, the running time does feel a little long.
RATING: 4/5
Review by Brogen Hayes