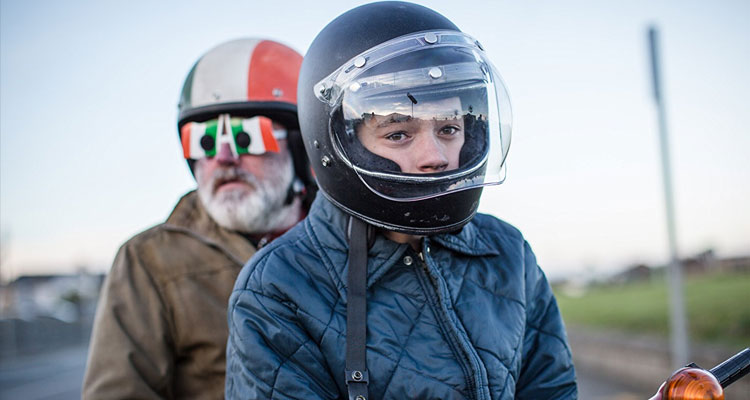 The Belly Of The Whale

The Plot: Having been away in Scotland, teenager Joey (Lewis MacDougall) comes back to Ireland. He’s still coping with the death of his father, the cause of which locals attribute to Joey. He’s something of an outsider, living in a windswept caravan in a small coastal town. That’s why he quickly identifies with Ronald (Pat Shortt), a middle-aged man who he comes into contact with. Ronald is worried about his sick wife and makes ends meet by hawking teddy bears to local bigwig and amusement arcade boss Gits (Michael Smiley). Bonded by their inability to fit in, Joey and Ronald hatch a plan to rob the arcade…

The Verdict: While the Irish film industry has been in good health in recent years, it’s still difficult to get funding for a feature film, let alone to get it made and then out into a crowded theatrical market (Paul Mercier’s recent, barely released We Ourselves being a good example). It would be a hard heart not to sympathise with Irish filmmakers, particularly producer-turned-director Morgan Bushe. His directorial debut The Belly Of The Whale is a film full of good intentions, backed up with notable acting talent and a quirky story of two no-hopers making a break for a better life. It’s a film that one hopes will work out its kinks over its slim running time. Sadly, this particular one fails to do so and limps to a surprisingly violent conclusion.

The script, which Bushe co-wrote with Greg Flanagan, is essentially about the friendship between Joey and Ronald. They’re two characters separated by age and life experience but bonded by misfortune and their entrepreneurial abilities. They’re an odd couple, but a two-dimensional one. MacDougall, who impressed greatly in A Monster Calls, brings some teen rebelliousness to his character. Shortt, already a proven dramatic actor after Garage, is touching as a broken and confused man. As likeable as these characters are, their friendship never really gels together in three dimensions. The writing isn’t clear enough as to what they hope to get from each other from their enterprise.

The tone of the film is also uneven. It veers wildly from an oddball character piece to a grim smalltown drama to a heist thriller. Our two characters make life-changing decisions without really thinking them through. The film has an identity crisis in that it can’t really decide on what it wants to be. That extends to the title, which is left unexplained and doesn’t actually come onscreen. Overall, The Belly Of The Whale is something of a beached whale. There are elements of a good film in here somewhere. It never really sparks to life though and flops about its ramshackle plot in search of a meaningful ending. While not a bad film per se, it’s just a film that doesn’t engage in the way one hopes for. Better luck next time for all concerned.