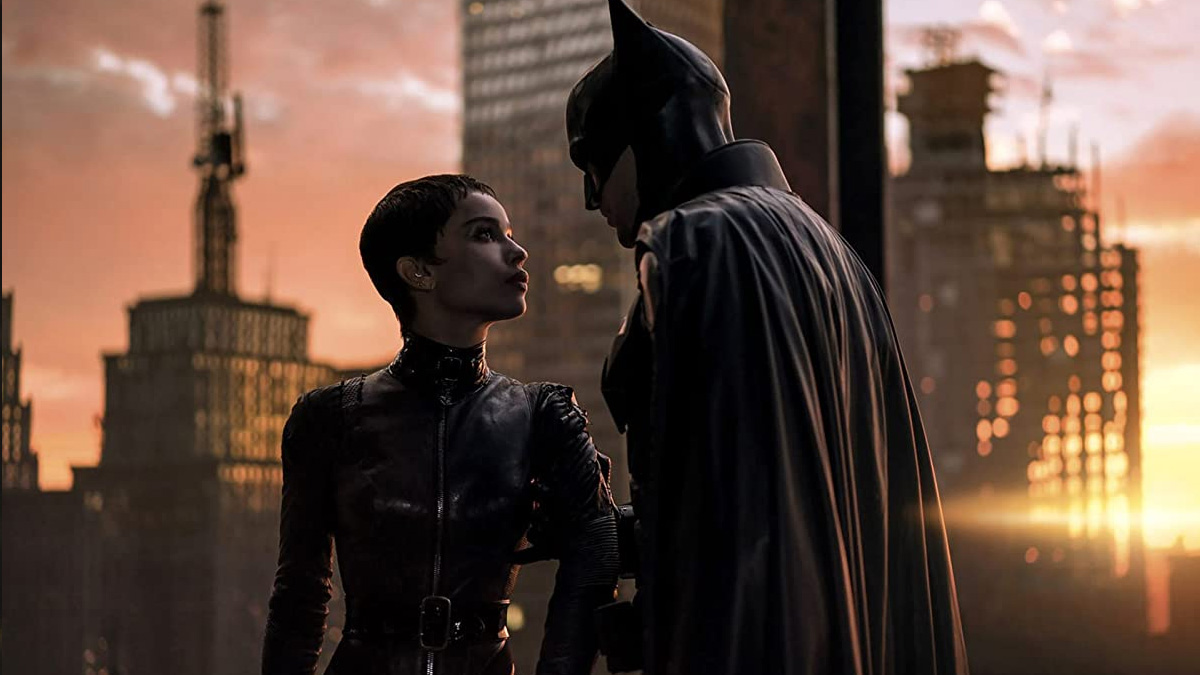 The Batman is an edgy, action-packed thriller that depicts Batman in his early years, struggling to balance rage with righteousness as he investigates a disturbing mystery that has terrorized Gotham. We caught up with Robert Pattinson who plays Bruce Wayne/Batman & Zoë Kravitz who plays Selina Kyle/Catwoman to chat about the new movie.

You’ve both worked on movies with massive fan bases before, is there an added pressure knowing that you have a large fan base so invested in these characters?

ZOE : The most difficult, and most important part is to do your best to block out that noise, because in order for me to show up and do my job and really dive into the character, if I’m thinking about what everyone else has to say, or thinking of all of the different versions of her that have been in the films and in the comics, it’d be really hard for me to make clear choices.  I’ve done my best to turn the deep love for this world into fuel instead of pressure, I think it made all of us work a lot harder because you know, how much this means to so many people and, instead of crumbling under that pressure, it’s exciting to try and deliver something that is new and exciting and you know, we love it too. So, if anything, I think it helps us make a better movie at the end of the day.

ROBERT : The level of anticipation drives your adrenaline, especially when we have a really long shoot like this that we’re shooting for over a year. It seems like Batman is one of the only movies that you just you just randomly see on Twitter, I just saw yesterday that it was suddenly trending online for absolutely no reason. There is a fan base that is very, very live & very vocal. It’s exciting, in some ways, it’s scary in some ways, but it’s not the conventional way of having to really sell people something, but there’s the converse side of it as like they can hate you afterwards. *laughs*

Robert, after ‘Twilight’, you have been making all these very interesting independent films. What made you come back to a big franchise again?

ROBERT : I mean, It’s weird. I didn’t really interpret it as anything different, as in going back to a big movie at all. When I first started talking to Matt (director) about it I didn’t really think it was even a possibility. I was just kind of having fun talking to him about the character. But then when we got deeper into it, I saw some of the images of how he wanted to present Gotham and how he actually wanted to interpret the character and it just felt like something that really, really appealed to me. I was quite surprised how it even came together. So I was pretty happy just playing little weirdos & maybe I’ll just make Batman into one of those. (laughs)

You’re portraying characters that have so much history, 80 or more years. What would you say is your most important contribution for your characters?

ROBERT : There’s just something about the history of it. Many of these characters have been reinterpreted many times. It’s on a level of doing something like ‘Hamlet’, the only thing you can really do is just give everything to it and not think, ‘Oh, I’m doing a superhero movie’. It felt like an incredibly serious movie for me.  We basically didn’t see anyone for a year, I mean, I guess no one else did really either but it was a real commitment, for a really long time. And I think that’s the only thing you can really contribute is to take it incredibly seriously.

ZOE : It goes back to talking about the pressure from the fans, right? Instead of crumbling under this, I’m going to prep my ass off and work out a million hours a day and read the script a million times, so my pages are falling apart and do everything that we can possibly do.

How much training did you have to do for ‘The Batman’?

ZOE : It was very intense. three months before we started shooting I began training and learning combat and kicking for hours a day and figuring out how she moves. We would both shoot 12 hour days and then go home and work-out for two and a half hours. I got stronger than I’ve ever gotten and it felt really good. I felt a lot of power it terms of being so connected & in control of my body. I was very conscious about how to do this in a healthy way and all the pressure especially as a woman, and as a woman that’s dealt with eating disorders in the past. So, I hired a chef and took my food really seriously and made sure I was getting really good nutrients at the same time.

ROBERT : There were long hours on the shoot, we were basically up at four in the morning, do an hour before work and when we finish at 9pm, do another hour, I mean it’s like impossible to maintain. If we’re doing a sequel for it I’m definitely going to start slower. I mean, I finished a Chris Nolan movie & literally the day I finished that I went straight into training for ‘The Batman’ and I felt like it was a lot, I think I’ll do a longer period and so it’ll be more gradual next time.

What was the biggest challenge for you bringing these characters to life?

ROBERT : Doing long dialogue scenes & emotional scenes behind the cowl completely changes what you think acting is…  I’ve been acting for 20 years and you feel you have certain crutches you can rely on, you think that it’s your eyes that are telling a story… And then you take away your eyebrows. You’re like, oh, The only thing that’s telling a story is the eyebrows.  The cowl has it’s own expressions that you have to learn. It’s almost like doing Kabuki or Greek tragedy theatre with a mask on.  I hear of people who go to drama school saying they’re doing mask work, and I never really understood what it meant. You have to completely relearn how to do angles and how to get your eyes to capture light in a different way. Even little things like having the camo makeup around your eyes takes away all the ability of light to get into your eyes. A lot of your performance is informed by just having to get light in your face,  I’ve never done anything like it before but once you get used to it, it’s another thing that informs the character.

ZOE : For me, it was a lot of the physical stuff, you work really hard on a scene and you know what you’re gonna do and you know what you want to do emotionally. I remember I almost cried the first time me and Rob were rehearsing a fight, we did the first rehearsal in the suit, and I’d gotten really good at this fight… but then they add rain , you can’t see and it’s so loud and we can’t even hear each other and my suit is leather, and I’m freezing cold. And I’m slipping, because the ground is wet and you have to throw everything away. You’re just like, alright, let’s just hope I don’t fall on my face and let’s hope that I can do this without my suit splitting. (laughs).

THE BATMAN is at Irish cinemas from March 4th 2022