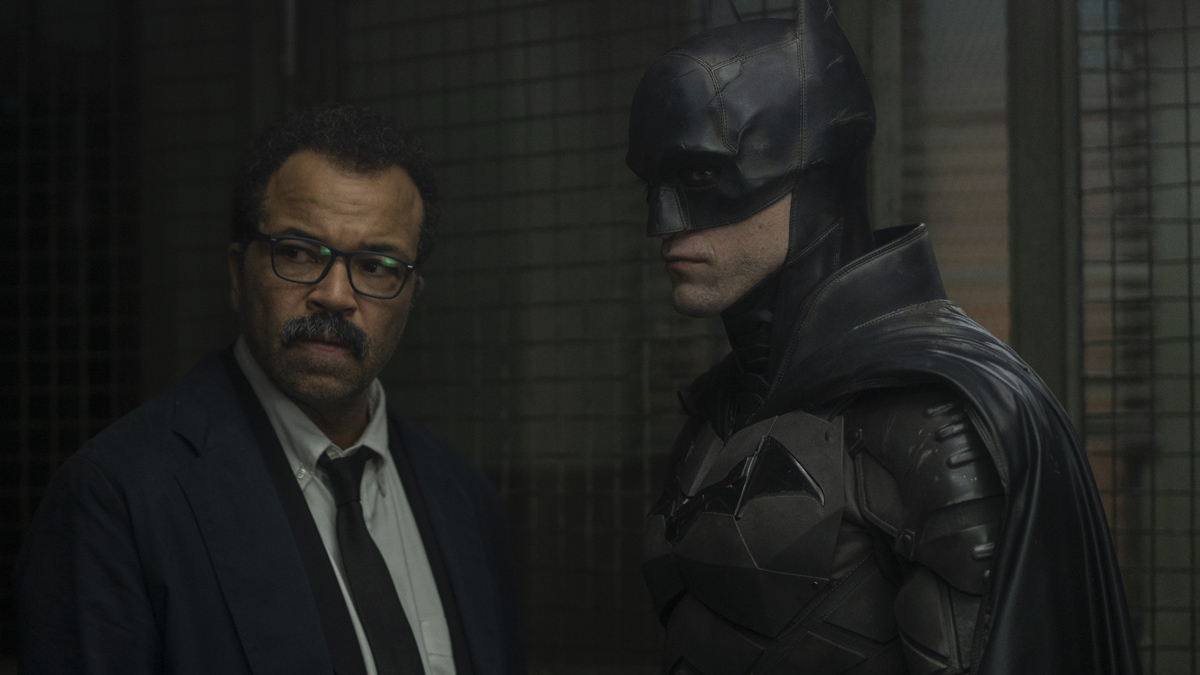 Opening in Irish cinemas this weekend, THE BATMAN is a darker more realistic interpretation of the caped crusader than we’ve seen on screen before. In the film Batman faces a sinister threat from a serial killer (Paul Dano) who threatens to expose the rotting underbelly of Gotham City with a version of the classic villain The Riddler that we’ve never seen before… Meanwhile Jeffrey Wright plays Jim Gordan, Batman’s ally and one of the few people he can trust. We caught up with both Paul Dano & Jeffrey Wright to discuss taking on such iconic roles…

There are so many interpretations of ‘Batman’, with this film being a ‘Batman Noir’, was that the appeal to you that you thought ‘wow, this is a very different Batman’?
PAUL DANO : Yeah, I was excited just by the prospect, not even knowing the interpretation, just because I do think Batman is generally the coolest of this world, and I have to say, that getting to go through the comics for this was really a super dorky pleasure. It reopened me to a world of artistry of these comics and graphic novels, which I now still love.

But getting Matt’s script and being able to read it. The interpretation was was clear from from page one. And you could tell you were in the hands of a real writer and a real filmmaker. There was a very clear point of view and the film on the page was very fully conceived. Even the action that you can feel in the trailer, which is quite visceral, in its nature, I think you could feel that in the in the script in the way it was written, which I was very impressed by. So even though it’s a character that we all know well and that Gotham has a place in our culture, I felt really excited by the way Matt entered this story, which was through a sort of noir or a detective tale. There was a mystery there that was an incredibly tense and propulsive domino effect that each scene has to the next it was really a powerful read.

And I think the thing that ultimately was most exciting for me to what Matt was bringing to the table was, it was really clear that there was something emotional at work underneath it. I thought there was a very strong undercurrent of something powerful. I think you can feel it in the way that Rob says ‘I’m vengeance’ in the trailer. There was an edge to this piece of material that I found both powerful and unsettling, and exciting. I think that us actors want to have good writing, It actually allows us to be our most interpretive because it gives us a foundation that we can really build a character from. And even though these characters are known, I do think we all had the chance to discover what our Riddler was, and it was really fun to go at this collaboration with Matt and with the other actors and, and make our movie.

JEFFREY WRIGHT : In some ways, the first read was a really great read of a script that also happened to be a Batman movie. The architecture of the storytelling was as Paul described, was very complete and these themes woven in they were, a lot of the assumptions that we normally make about Batman were not made in this inside this script, its was around the mystery of who he was, but also certain themes are built on class-tension and things that we might otherwise take for granted were resonant in the script in a way that was really exciting. It’s almost like Matt was co-opting the genre for a different type of storytelling. But doing it in a way that honored the history of this series, but also reinvented it in a just a justifiable way.

Was shooting a Batman movie a special experience for you, or did it feel like just another project?
PAUL DANO : I was surprised by how ‘schoolboy dorky giddy’ I felt about getting the good fortune to go do this, and luckily, the way that Matt works is really thorough and detailed and quite intense. And so it sort of brought the best of both worlds together where we were working against these incredible backdrops with an incredible production team that our production designer James Chinlund, our costumes are great.
I think you can see in the trailer, I think the images are quite strong and I think we could feel that on set. So whether it was on location or whether we were on the stage, what we were working with was really strong from the words on up and from the archetype to the sort of deeply personal. But when we got to go to set I feel like
I got to go do, we got to go do some real scene work too. We weren’t just pumping out a Batman movie I think everybody was was pretty hungry to make the best thing that they could make and bring as much to it as they could and I really appreciated being on this set, and it wasn’t always easy. These energies aren’t always easy to work with, it can be really fun, but it can be hard but I feel like it was a special film.

JEFFREY WRIGHT : It was a pretty elevated thing. And echoing Paul, it goes back to the script and Matt’s vision and in the intensity with which he created that world. It was it was a pretty special thing. It was a grind, it took us a long time. In obviously unusually challenging circumstances. (covid) But despite the difficulties of shouldering something of this scale. It was exciting to be to be to be a part of it, and to be on set each day, just to explore the given beats that we were allowed. There is a real calculus to his script. It’s like clockwork, that’s marking the mystery through it, and it was really well considered. It was a heightened it was a heightened time on it, I have to say , it wasn’t easy, but it was pretty thrilling.

Jeffrey. Coincidentally, you played Bruce Wayne and Batman on the audio adventures on a recent HBO show. I was wondering, what was it like to pay the Batman himself and did you have a chat with Robert Patterson about the infamous batman voice and maybe compare notes with how to do the voice?
JEFFREY WRIGHT : I’ll be slightly embarrassed to say that I almost forgotten that I’d done that series. By the time I worked on the film, simply because we did that about four or five years ago. And I was wondering if it was going to come out but there’d been a lot of other scripts and projects, filtered into my hard drive by that so no, I didn’t I didn’t talk to you know, talk to you know, Rob about that at all. I did enjoy I enjoyed working on that because I kind of got a thing for radio drama.

And the way that it was described to me was as that I mean, I love you know, the old you know, the old radio shows and the old you know, Mercury Theater, Orson Welles stuff and I you know, I just love the tones of that and the melodrama and you know, I love that it’s slightly stylized and that’s what we were going for in that so yeah, I had a I had good fun with that, but that exists on another side of the spectrum from our Batman to some extent. Our pieces is, is much more kind of grounded in a certain type of authenticity. And in and even though that was more this was kind of a more realistic, gritty, noir world. So no, I left I left that there and brought other things here, but they related.

THE BATMAN opens in Irish cinemas on March 4th 2022