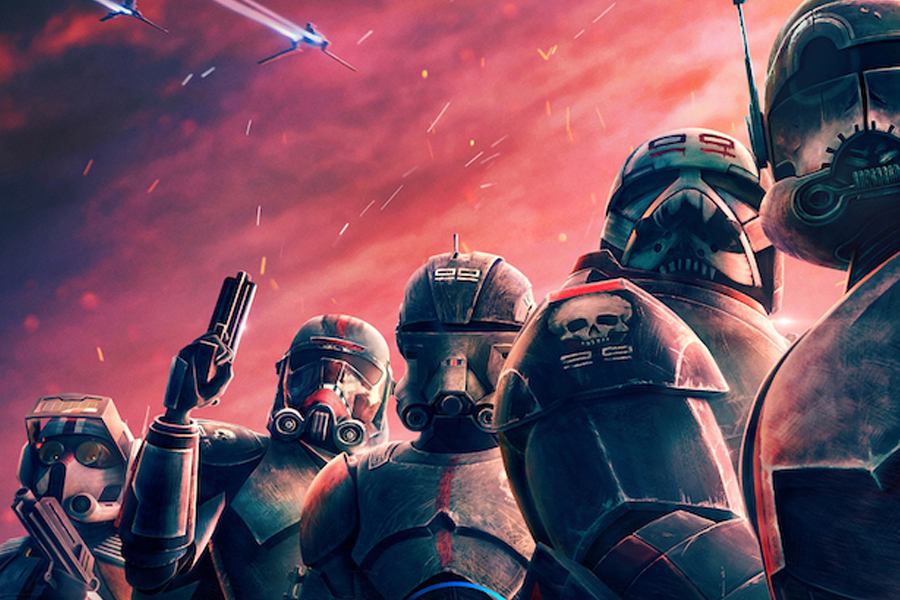 Lucasfilm’s “Star Wars: The Bad Batch,” is a new original animated series launching exclusively on Disney+ on Tuesday, May 4, with a special 70-minute premiere, followed by new episodes every Friday starting on May 7.

“Star Wars: The Bad Batch” follows the elite and experimental clones of the Bad Batch (first introduced in “The Clone Wars”) as they find their way in a rapidly changing galaxy in the immediate aftermath of the Clone War. Members of Bad Batch—a unique squad of clones who vary genetically from their brothers in the Clone Army—each possess a singular exceptional skill that makes them extraordinarily effective soldiers and a formidable crew.

We very lucky to be a part of a behind the scenes Press Conference recently, this special event was hosted by Ash Crossan and had supervising director, along-side executive producer, Brad Rau, head writer and executive producer, Jennifer Corbett and the Bad Batch themselves, Dee Bradley Baker.

For those coming into this series cold, (which we don’t recommend… there’s some great shows you need to get watching!) “Star Wars: The Bad Batch” follows the elite and experimental clones of the Bad Batch (first introduced in “The Clone Wars”) as they find their way in a rapidly changing galaxy in the immediate aftermath of the Clone War.
Members of Bad Batch—a unique squad of clones who vary genetically from their brothers in the Clone Army—each possess a singular exceptional skill that makes them extraordinarily effective soldiers and a formidable crew.
Ash got right into the action and asked the questions that fans want to know about this sequel series to “Star Wars: The Clone Wars”.

She brought up the question to everyone at the panel, “Would it be like, asking you all to pick a favourite child if I asked who was your favourite member of the Bad Batch?”
This was a hilarious question as per usual no one was able to pick who they preferred because we all know when you have a bunch of characters like the Bad Batch one does shine for every audience member. Luckily, Baker was on hand to point out how he liked Wrecker (the bruiser of the batch). He said he liked his honesty and his humour. He also enjoyed the fact that of all the Bad Batch Wrecker is the least like him.

Ash then brought up the time period the story is set in and how it is set immediately after the events of the terrifying Order 66. She brought up how this affects our oddballs. Jennifer was kind enough to discuss where the Bad Batch are when this happens and how it affects them going forward.

She stated the mind frame of the clones is fascinating because at first they just hear and the war is over and they don’t know what to do with themselves now. This is particularly strange for the Bad Batch because they are specially cloned for one purpose and it is a strange feeling for them. There is also the fascinating implications of this time period where planets know the war is over but they don’t yet know the Empire has risen in its place.

Ash then brought up a great question regarding the evolution of the Bad Batch in this series. How when they meet a new character known as Omega everything changes in their lives. They go from a sealed unite separate from every other clone unit to something else, something that is unprecedented. It’s this factor that Omega brings to not only the Bad Batch but also the Star Wars franchise as a whole which has me excited for its debut.

Other questions that were asked were how did it feel telling more intimate, emotional stories with the Bad Batch that did not involve grand and over the top characters like the Jedi or the Sith?
Jennifer in particular was very excited to be telling these kind of stories. Unconventional family dynamics being explored gives more emotional weight to the action that is on show. This was followed up by Baker expressing his excitement for bringing further depth to the Bad Batch who he saw as another step in his exploration of the clone characters as a whole. His excitement for this series was infectious. It did state it is easier to switch between the members of the Batch easier than any other clone he has played.

“And it’s like, I can see them. I feel like I know them, and it actually [LAUGH] it actually helps that they’re-they’re further differentiated in-in vocally, and also in terms of their-their-their personality and their-their-their mood, shall we say?”
Regarding the animation style Jennifer and Brad wanted it to feel like a spiritual successor to “Star Wars: The Clone Wars”. Brad wanted to honour the legacy of Clone Wars. However, everything in “Star Wars: The Bad Batch” is tighter, the fidelity is tighter, the style is tighter. It makes for a far more visually sumptuous experience.

The panel then ended on what can only be described as a tease and like me I think you’ll also be intrigued by it. Ash brought up whether there were a finite number of episodes planned and Brad simply stated, “Yes”.
For me this is exciting news as they have a clear plan in place. They have it all mapped out which is always the best storytelling decision, in my opinion.

“Star Wars: The Bad Batch” makes its debut on May 4th with a special 70-minute premiere, followed by new episodes every Friday starting on May 7th.