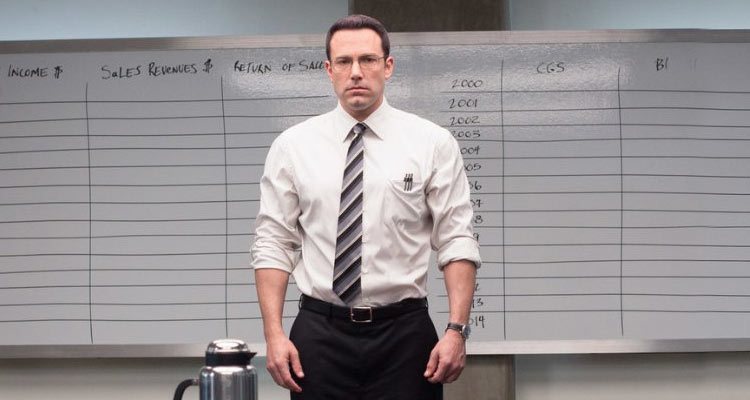 THE ACCOUNTANT (USA/15A/128mins)
Directed by Gavin O’Connor. Starring Ben Affleck, Anna Kendrick, J.K. Simmons, Jon Bernthal, Jeffrey Tambor
THE PLOT: Christian Wolff (Ben Affleck) is a highly intelligent accountant with a reputation for rooting out the most devious instances of creative accounting. He is hired by new client Lamar (John Lithgow) to investigate a potential fraud committed in his company. By uncooking the books, he will reveal the culprit. He receives some unwanted help from perky fellow accountant Dana (Anna Kendrick), but Christian greets her with a frosty reception. He is a maths savant with autism, lacking in social skills and has an ability to be blunt with people most of the time. He also has a particular set of skills, which make him a nightmare for people who double-cross him or do not let him finish his work. On his trail is corporate assassin Brax (Jon Bernthal) and FBI Agent Marybeth (Cynthia Addai-Robinson), who is investigating a series of deaths connected to a mysterious individual known only as The Accountant.
THE VERDICT: “Calculate your choices’ is the tagline for ‘The Accountant’. It is an apt description for this tense thriller that belies the initially dull-sounding title to become a very particular character piece, with some unexpected plot twists and an offbeat sense of humour.
Having lost his way somewhat with the troubled, under-whelming ‘Jane Got A Gun’, Gavin O’Connor is back on form with ‘The Accountant’. The script, by Bill Dubuque, sat on the famed Hollywood Blacklist for several years until it finally went into production. It is certainly a story that stands out from the crowd and is more intelligent than the usual studio-produced thriller. The strongest point here is Christian – or at least the autistic man we get to know under the name of Christian. O’Connor and Dubuque spend time on some well-placed flashbacks to Christian’s childhood, where he had difficulty fitting in with others and had an inner rage that his military father tapped into. That rage later manifested itself in a deadly, ruthless ability in rubbing out people who challenge him. Christian is definitely a sharpshooter who shoots first and asks questions later.
As essayed by Affleck in a concentrated, well-defined performance, Christian is a character to be reckoned with. But it is also through the eyes of other characters that we observe Christian’s behaviour, such as the unflappable Dana – and who better than Kendrick to play her? Christian is not without a sense of humour, even if it is a bit bewildering and hard to swallow at first. O’Connor takes his time with the story, letting it unfold like a peeling onion – one that stings of course. The film is funnier than its ostensibly sombre tone suggests – another plus point.
Those expecting a Jason Statham-style film where there is a shoot-out or fight sequence every ten minutes will be disappointed. Those expecting a more measured, clinical dissection of how a killer is both born and made will find much to enjoy in ‘The Accountant’. When the shoot-outs and fight sequences come, they are crunchy, fast and pack a punch. Pretty much like this lean, mean film itself. ‘The Accountant’ is not a calculated risk and is worth your hard-earned dough.
RATING: 4/5
Review by Gareth O’Connor