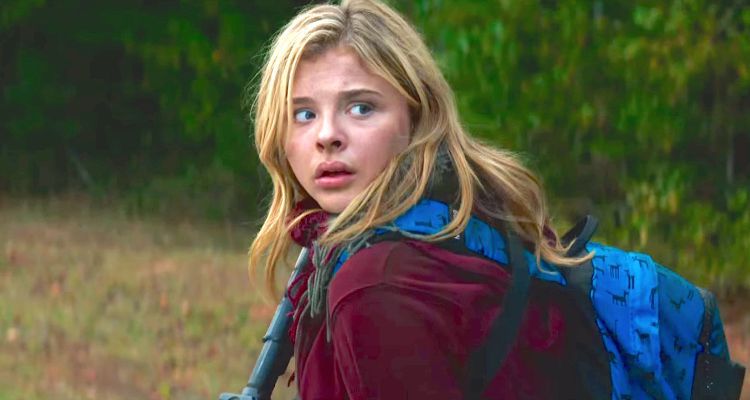 THE 5TH WAVE (USA/12A/112mins)
Directed by J Blakeson. Starring Chloë Grace Moretz, Ron Livingston, Maggie Siff, Nick Robinson, Tony Revolori, Liev Schrieber, Maria Bello, Alex Roe, Maika Monroe.
THE PLOT: In the wake of an alien attack on Earth, Cassie (Chloe Grace Moretz) is left to care for her younger brother after their parents are killed. When the two are separated, Cassie is determined find her brother again but since there have been four waves of the attack on the planet, the people are bracing themselves for a fifth; one that could be the most deadly of all.
THE VERDICT: ‘The 5th Wave’ feels like the millionth young adult film, based on a novel and set in a dystopian world, to come out in the last five years. Based on a novel by Rick Yancey, the film is one of the few that is about the end of the world but not brought about by humans, but it is also a film that suffers from being predictable, obvious and way too familiar.
It is obvious that now Chloe Grace Moretz has hit the age of 18, she is trying to diversify her career, and there are worse things she could have done than ‘The 5th Wave’. The actress gets to run the gamut of human emotions, have a bit of a romance and kick some ass along the way. It’s just a shame that the story of the film is so utterly predictable the entire way through. The rest of the cast features Ron Livingston, Maggie Siff, Zackary Arthur, Maria Bello, Tony Revolori, Alex Roe, Maika Monroe and Liev Schrieber who all do relatively well with what they are given; the trouble is that they are not given very much.
The screenplay for ‘The 5th Wave’, written by Susannah Grant, Akiva Goldsman and Jeff Pinkner seems to have pared down an informative and engaging novel into its component parts, and stripped away any of the film’s mystery or twists and turns. Once the four preceding waves have been explained, and the audience knows what kind of danger humanity is in, it is incredibly obvious which way the film is going, and it does nothing to even try to throw us off track.
Director J Blakeson does well enough in the military scenes, but struggles more in the heartfelt scenes between Moretz and Roe. As well as this, fracturing the film’s narrative may have seemed like a good idea at the time, but this leaves the film messy as it jumps between a small story and a much bigger one.
In all, ‘The 5th Wave’ is enjoyable enough but utterly predictable in the end and it seems that many of the questions the novel raises are simply ignored here for the sake of shoehorning in a romance and a couple of set pieces.
RATING: 2/5
Review by Brogen Hayes