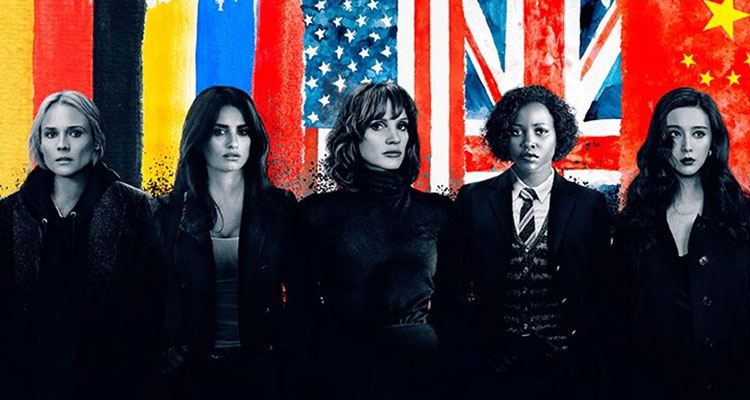 Movie Review
2
By the numbers

In short: By the numbers

The Plot: CIA agent Mace (Jessica Chastain) does things her way. On a mission in Paris with fellow agent Nick (Sebastian Stan), they attempt to track down a data key connected to Luis (Edgar Ramirez). They are intercepted by German agent Marie (Diane Kruger), who is also after the data key. The size of a bar of chocolate, it has the power to open any closed system and potentially bring down planes and more. Luis’ analyst partner Graciela (Penelope Cruz) and IT boffin Khadijah (Lupita Nyong’) get roped into the mission when Luis goes missing. They’re all going to have to put aside their national loyalties and work together to stop a catastrophic result…

The Verdict: Originally set to open a year ago, it is telling that The 355 maintained its early January release date. Only Oscar contenders and middling, often unwanted fare from the studio vaults are released in cinemas at this time of the year. The 355 doesn’t do much to dispel that theory regarding the latter. It’s a female-fronted espionage action thriller that on paper has a lot going for it. A cool concept, a respectable international cast of actresses not confined to playing just mother roles/partners and a typically twisty spy story with double crosses and double agents aplenty. After all, the ladies can be kick-ass merchants as much as the battered, weary guys that so often dominate the action landscape. That was the idea that Jessica Chastain had when she served on the Cannes jury in 2017, wondering why there are not more female-oriented action films. Indeed. At one stage, there was even talk of The Expendabelles, a spin-off from The Expendables franchise. Instead, we have a fourth film with the guys back once again.

There is an appetite for this kind of female action film. Done successfully, it could be a win-win for studios, audiences and critics alike. Unfortunately, the final judgment on The 355 is that it is not that film. The problem partly lies in the overly-convoluted script by Theresa Rebeck, Bek Smith and director Simon Kinberg. It has a lot of moving parts, with all the characters working against each other for a good chunk of the film. By the time the core group of women finally decide to work together for the greater good, valuable time has been lost in the narrative. The introduction of the mysterious Lin (Bingbing Fan) is too late in the story to have any real impact either. There are vague mumblings about the real threat trying to control the data key, but instead we have a familiar but uncredited actor in a suit being unconvincingly threatening. Timing and pacing is a constant issue here. By the time the script finally gets going, it then throws in unnecessary complications like an obvious and predictable character death that it then takes back.

Kinberg has not learned much since the poor performance of his directorial debut X-Men: Dark Phoenix. He directs action and fight sequences straight from the Hollywood playbook, as if he’d been studying the recent Charlie’s Angels dud for notes on how to direct a group of women in close-quarter fight sequences against male aggressors. Admittedly, there is some energy in them and the leading ladies acquit themselves well but these sequences never really fizz in the way that they should. These are talented actresses who work hard with what they have got, but they appear to be doing a lot of the heavy lifting onscreen. There’s an overall lethargy to Kinberg’s direction, moving his pieces around the chessboard with a workmanlike lack of precision. Imagine how much more interesting this film might have been if Chastain had approached Kathryn Bigelow for a re-team following the success of Zero Dark Thirty. That would have been a dynamite combination. For a film that hints at the history of American female espionage in its title and wants to be so much more than that, The 355 is very much by-the-numbers stuff. Don’t count on there being a sequel.

In short: By the numbers