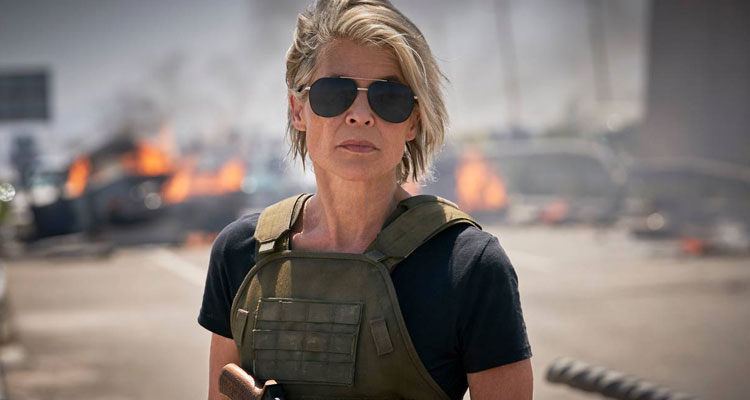 The Plot: In August 1997, Judgment Day was stopped by Sarah Connor (Linda Hamilton). However, the fate of the world wasn’t changed and a new threat has arisen. A hard-to-kill new Terminator (Gabriel Luna) has been dispatched to 2019 to assassinate Dani (Natalia Reyes), for she holds the key to the future of humanity. She’s not alone, as human with machine enhancements Grace has been dispatched to protect her, along with Sarah. In order to find out what the next move is, Sarah will have to confront an old friend, the T-800 (Arnold Schwarzenegger)…

The Verdict: We can breathe a sigh of relief. 35 years after James Cameron’s breathlessly brilliant landmark film The Terminator, the franchise is still ticking away with its sixth entry Terminator: Dark Fate. Someone has been tinkering with the timeline though to right some wrongs. It almost didn’t happen, given how shockingly poor the previous entry Terminator: Genisys was. It pretty much terminated the franchise. Let’s not forget that it got Cameron’s seal of approval, but he handed the director’s megaphone to Alan Taylor. That’s also the case with Dark Fate, given that Cameron is immersing himself in four Avatar sequels for a decade. Deadpool director Tim Miller has taken over. But with the rights to the series now reverting back to Cameron, he’s able to exert more creative control in the co-written script and do a course correction on the Terminator timeline by conveniently ignoring the events of Rise Of The Machines, Salvation and Genisys.

That’s a tricky narrative move that doesn’t always work. See last year’s profoundly disappointing Halloween reboot which has inexplicably spawned two further films. Dark Fate is a bit more subtle in its approach to its timeline, also returning to a terrific female lead character and thereby promoting Linda Hamilton to top billing, just above Arnold Schwarzenegger. Hamilton is the extra boost that the film needs to justify its existence, bringing the living-off-the-grid fugitive Sarah Connor back into the Terminator fold. And boy, does Hamilton deliver. She slips back into her most iconic role like a glove, bringing her sharp and sweary ballsiness back like it was 1991 all over again. One of the stars in this rating belongs to her alone. Perhaps as a reflection of his age, Schwarzenegger has a little less to do this time around but is a welcome presence that surprises with some unusual but credible plot developments.

The two veterans and offscreen old friends are equally matched by newcomers Mackenzie Davis and Natalia Reyes, who bring some humanity and resolve to their roles as protector and fledgling liberator respectively. The weak link in the machinery here is Gabriel Luna, who delivers a very bland and machine-like performance as a new liquid-metal Terminator who has the ability to clone his machine self. Maybe that’s the point, but previous Terminators had a dry sense of humour and curiosity about human behaviour. Luna just runs, chases and looks bored for most of the film – or maybe that’s just the CGI version of him taking over (which looks a bit cut-rate). He doesn’t seem that threatening for a top-of-the-line Terminator model, so the plot becomes more about finding a way to stop it rather than kill it.

Miller does a competent job with the action sequences, which begin almost immediately and include a variety of environments and a suitably large-scale climax in tone with the first two films. It certainly delivers on the action front, if not always on the story front. There’s a little too much going on in the plot, which could have been streamlined into something more straightforward. There’s a beautiful simplicity about the relentless, pulse-pounding nature of The Terminator that has been mostly glossed over in the sequels. One would hope for a back-to-basics approach, but that would require Cameron to return to the director’s chair. That’s unlikely to happen at the moment. Instead, Dark Fate is a rescue of sorts for the franchise and rejuvenates its reputation – just about. It’s neither the disaster that was initially rumoured nor the great saviour. Considering what came immediately before though, Dark Fate is a welcome return to form. I’ll be back indeed.