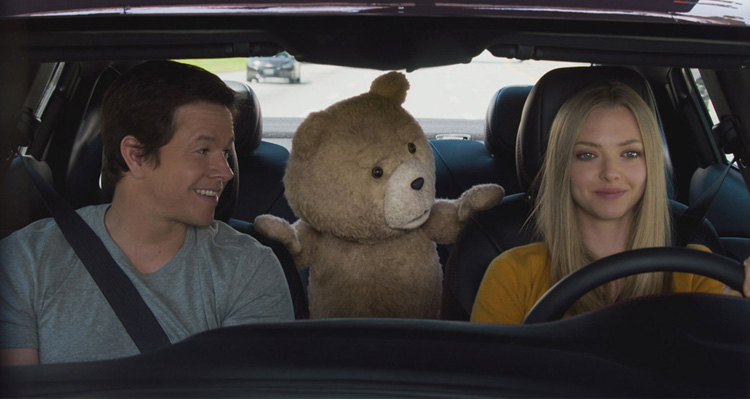 TED 2 Review (USA/16/115mins)
Directed by Seth MacFarlane. Starring Seth MacFarlane, Mark Wahlberg, Amanda Seyfried, Sam Jones, Morgan Freeman, Liam Neeson, Tom Brady.
THE PLOT: After Ted (Seth MacFarlane) marries the beautiful but ditzy Tami-Lyn (Jessica Barth), it only takes one short year for the two to start having troubles. Convinced that a baby would solve their problems, the two start chasing down possible sperm donations or adoption, unaware that they are drawing Ted to the State’s attention. When Ted is deemed to not be an actual person, Ted, John (Mark Wahlberg) and their lawyer Samantha (Amanda Seyfried) team up to fight for Ted’s recognition and human rights.

THE VERDICT: TED, released in 2012, was a surprise hit, and surprisingly funny, even though the jokes, the swearing and the novelty had just about worn off by the end of the film. This week, Ted is back with a sequel, and although there are a couple of giggles in there, this is not the film to put the shine back on this foul mouthed talking teddy bear.

Seth MacFarlane and Mark Wahlberg reprise their roles as Ted and his best friend John, respectively. They still talk in over the top Boston accents, get high and try to offend as many people as possible, so nothing has changed there. Jessica Barth returns in an expanded role as Tami-Lyn, although she is never given a chance to round out her character. Amanda Seyfried does fairly well as stoner lawyer Samantha, making the character sweet and fun, with a serious side. Cameos abound in the film, with Patrick Stewart, Morgan Freeman, Sam J. Jones, Tom Brady, Liam Neeson and John Slattery all turning up at some point.

Seth MacFarlane, Alec Sulkin and Wellesley Wild’s screenplay has some funny moments – Amanda Seyfried finally addresses the fact that she has eyes of similar size to Gollum – but the laughs are few and far between. Although there is a story here that has merit, it is almost totally ignored for whole sections of the film, for more gags and silly situations to be forced in. In fact there are times when the entire film seems to be made up of vignettes and stand alone scenes, rather than allowing these to form a cohesive film. As well as this, the villain turns out to be the one from Ted, with almost the exact same motivations and resolution as the first film.

As director, it is clear that Seth MacFarlane is trying to hark back to the Golden Age of Classical Hollywood cinema with TED 2 – think the musicals of Gene Kelly and the comedies of Marilyn Monroe – but with a lot more swearing. This works at times, but since the film feels like gags stuck together with a story, this never quite works. The performances are fine, but the direction and actors are hampered by a script that never really allows them to play a character, only a caricature.

In all, there are a couple of giggles in TED 2, and it is clear that MacFarlane is trying to hark back to the classical age of Hollywood cinema, but the joke is over, the novelty has worn off and the whole thing feels a little familiar. Fans will love it but there is very little here for the non-fan. Oh, and the post-credits scene is not really worth the wait.

Review by Brogen Hayes
2
For fans only