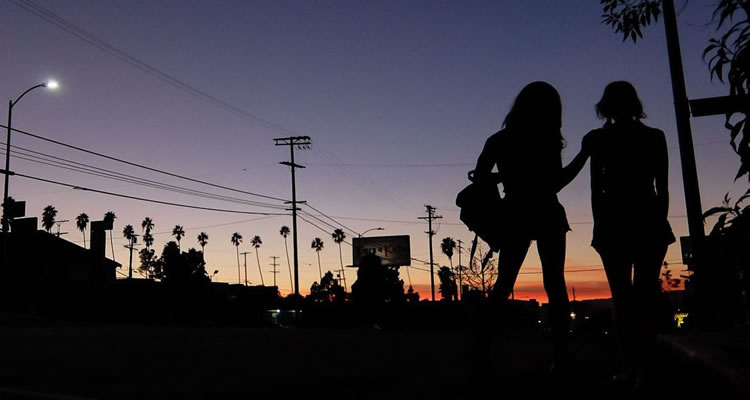 TANGERINE (USA/IFI/88mins)
Directed by Sean Baker. Starring Kitana Kiki Rodriguez, Mya Taylor, Mickey O’Hagan, James Ransone, Alla Tumanian, Luiza Nersisyan, Karren Karagulian.
THE PLOT: Two trans women, Sin-Dee (Kitana Kiki Rodriguez) and Alexandra (Mya Taylor) meet at their old haunt Donut Time, after Sin-Dee is released from prison. As they catch up, Alexandra accidentally reveals that Sin-Dee’s pimp and boyfriend Chester (James Ransone) was sleeping with a ‘fish’ woman while she was away. This sends Sin-Dee on a rampage through LA on Christmas Eve, as she tries to track down the people she believes have wronged her.
THE VERDICT: There has been plenty of talk about ‘Tangerine’; mainly because it was shot on three iPhone 5s phones in a truly independent production. This is not why ‘Tangerine’ should be talked about however, the film is a fascinating, funny and often tragic slice of life at a highly emotional time in LA, and one that shines a light on a world that is all too often hidden in shadows.
Kitana Kiki Rodriguez and Mya Taylor are both fantastic in the lead roles of ‘Tangerine’. Both are transgender women, and both have little if any previous acting experience. The relationship between the two characters feels real and complex, as all long-standing relationships are, and both actresses are engaging enough to hold their own on screen. Both actresses balance humour and introspection well, and allow the audience to understand the depth of emotion that is ever present in their lives. The rest of the cast, Mickey O’Hagan, James Ransone, Alla Tumanian, Luiza Nersisyan, do well with their parts, and Karren Karagulian standing out as an immigrant taxi driver whose relationship with these working women is deeper than it seems at first glance.
Sean Baker and Chris Bergoch’s screenplay has a manic, open feel to it. The film buzzes with energy, and the exchanges between the women on the streets is filled with quickfire wit, and raw emotion. There are times where the audience may find themselves wishing these Trans characters were portrayed as anything other than ‘working girls’, but it becomes clear that these women are strong and self sufficient, and choose to make their living in the oldest profession in the world.
Director Sean Baker allows the audience to get to know Alexandra and Sin-Dee, to learn about them, and to learn that these are rounded and warm characters. We may not ever feel we would make these decisions ourselves, but we can understand why these characters’ motivations. The film is full of energy and sparkle and, although some family home scenes drag the pace down slightly, and we may not always quite understand what all this manic movement is leading to, when the worlds of the film collide, it is engaging and packs a strong emotional punch.
In all, ‘Tangerine’ is fresh, engaging and strong. The film feels special – like Kevin Smith’s first film ‘Clerks’ – and Rodriguez and Taylor are truly special in the leading roles. That said, the pacing struggles from time to time, and there is sometimes a scattered feel to the film, but when ‘Tangerine’ comes back together, it is a startlingly honest and fresh piece of work that is both hilarious and heartfelt.
RATING: 4/5
Review by Brogen Hayes