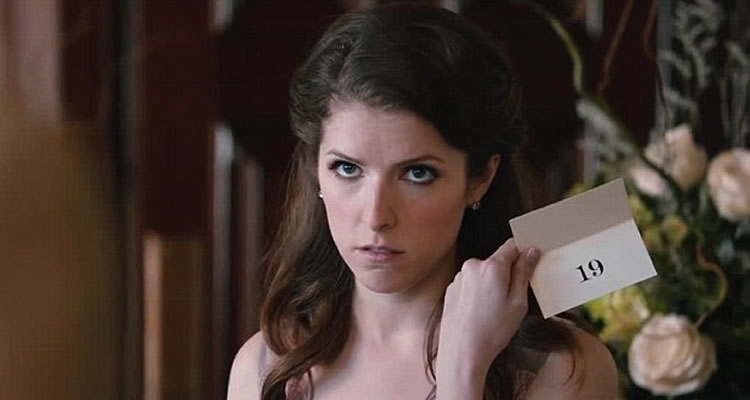 TABLE 19 (Finland | USA/12A/87mins)
Directed by Jeffrey Blitz. Starring Anna Kendrick, June Squibb, Craig Robinson, Lisa Kudrow, Stephen Merchant.
THE PLOT: After she is dumped by the Best Man via text, Eloise (Anna Kendrick) steps down as maid of honour at her oldest friend’s wedding, but decides to attend the wedding anyway. Finding herself at table 19, with other people who, in Eloise’s own words, should have known better than to RSVP yes, Eloise soon learns that she is not the only one keeping a secret at this wedding.
THE VERDICT: Written for the screen by Mark and Jay Duplass, it would be easy to dismiss ‘Table 19’ as a stereotypical, fluffy rom-com, but there is a darker emotional core to the film that makes it engaging and sweet.
The cast of ‘Table 19’ is made up of Anna Kendrick, June Squibb, Lisa Kudrow, Craig Robinson, Tony Revolori and Stephen Merchant. These are the characters seated at table 19, and each of the cast are given the unusual chance to round out their characters well on screen – even though this is clearly Eloise’s story – and allow the audience to connect with the dumped girlfriend, the former nanny, the married couple who are in trouble, the young man told to go to the wedding by his mother, to meet someone and the disgraced family member who is not really able to hide his secret. Much of the humour in the film comes from Stephen Merchant’s character; the actor’s timing is charming and often brilliant.
Mark and Jay Duplass’ screenplay takes the wedding rom-com and plays with the tropes that we are familiar with seeing in these films. There are plenty of laughs to be had with this quirky and sweet film, but the Duplass brothers make sure that the film has tons of heart for the audience to connect with. There are times when the pacing of the film struggles to keep the audience fully engaged, however, and there are character choices made that feel as though they are more in keeping with the rom-com genre, rather than turning it on its head.
Jeffrey Blitz is an Oscar nominated documentary director, but has cut his comedy chops on the TV shows ‘Parks and Recreation’ and ‘The Office’. Blitz does well in making sure the audience identifies with the characters and roots for them, while making sure that the over the top elements of the film are played for laughs, and get them. There are times when the pacing struggles, and the to-ing and fro-ing in and out of the hotel becomes rather tiresome, but there is a strong and warm heart to ‘Table 19’, which just about makes up for this.
In all, ‘Table 19’ is a gentle comedy with a dark emotional heart. There are plenty of laughs to be had with the film, and tons of touching moments, but there are also times when ‘Table 19’ stops poking fun at the genre it is lampooning, and gets a little too caught up in the rom, and loses the com.
RATING: 3.5/5
Review by Brogen Hayes