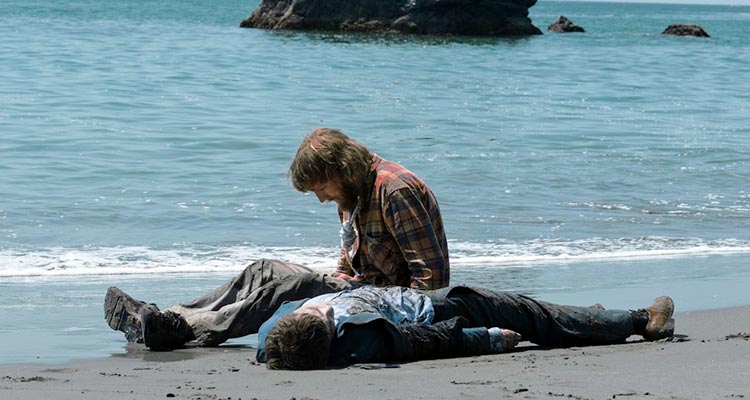 SWISS ARMY MAN (USA/Club/97mins)
Directed by Dan Kwan and Daniel Scheinert. Starring Paul Dano, Daniel Radcliffe, Mary Elizabeth Winstead, Shane Carruth, Richard Gross
THE PLOT: Alone on an island after a shipwreck, Hank (Paul Dano) has given up hope and is trying to hang himself when he sees a body on the beach. Although the man – who Hank christens Manny (Daniel Radcliffe) is dead – Hank soon sees a benefit from his new companion; his constant flatulence. As Hank tries to get home, and strikes up a strange friendship with Manny, he explores life, love and his relationships.
THE VERDICT: If you have heard of ‘Swiss Army Man’, then chances are you have heard that Daniel Radcliffe plays a farting corpse. While this is strictly true, there is a lot more to the film, including a surprising warmth and sweetness, buried underneath the film’s downright oddness, which is wears openly on its sleeve.
Paul Dano leads the cast as Hank. All we know about the character is that he was washed up on the island during a storm, and has had enough of life without company or food. Through his relationship with Manny – which is admittedly all in his head – the audience learns more about this character, why there doesn’t seem to be a search party out for him, and his views on life and love. Daniel Radcliffe makes the flatulent Manny a combination of a friend, multi-tool and tabula rasa for Hank to pour his ideals into. Manny gets most of the smiles throughout the film – there are no outright laughs, unless you find farts hilarious – and his character becomes gentle and childlike with a strong sense of loyalty. Both performances in the film are wonderful and they compliment one another incredibly well. The rest of the cast features Mary Elizabeth Winstead, Shane Carruth and Richard Gross.
Writer/directors Dan Kwan and Daniel Scheinert – credited as Daniels – have taken an incredibly odd premise, kept it weird, but somehow managed to make it a touching bromance, adventure tale and existential exploration. The dialogue is smart and often raises a wry smile from the audience, and there is plenty of warmth and heart in the film. It is easy to see why more delicate audiences could be turned off, since there is a lot of discussion of poop, masturbation, erections and flatulence, but there is a warm and gentle heart at the centre of ‘Swiss Army Man’, which is in some ways, unexpected.
As directors, Kwan and Schienert keep the film moving at a decent pace, and keep the mystery of Hank’s stranding to themselves, in order to keep the film engaging. It would be easy to stay superficial on such an odd film, and dismiss it out of hand, but there is a lot to explore here, such as the nature of mental health, survival and the day dreams that get us through those long and dull afternoons. The performances from the two leads are superb, although it all goes to hell once civilisation begins to creep in.
In all,’ Swiss Army Man is a rare’, weird and charming delight. The two leads are strong in their sublimely bizarre roles, the story is touching but it all falls apart in the final 10 minutes, leaving the film feeling rather unfinished and let down by its ending.
RATING: 4/5
Review by Brogen Hayes