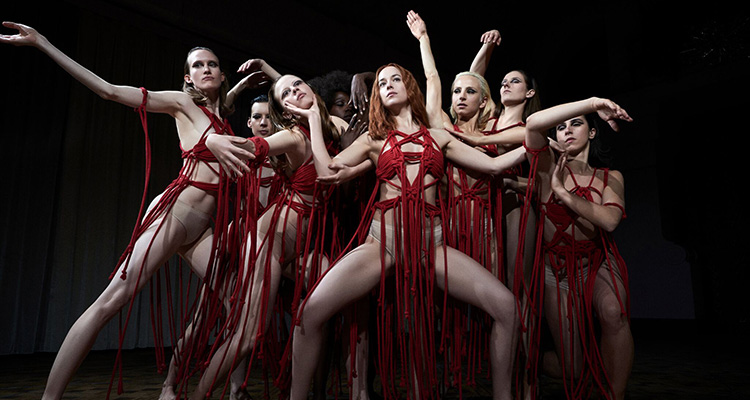 The Plot: Berlin, 1977. Susie (Dakota Johnson) arrives in the city from Ohio to attend a famous dance academy run by the gaunt Madame Blanc (Tilda Swinton). She fits in right away, befriending the younger Sara (Mia Goth). Susie impresses everyone immediately with her intense commitment to exhausting, experimental dance routines. However, there is a sickness at the heart of this place. Psychotherapist Dr Josef (also Swinton) watches from afar, convinced that the academy is secretly a front for a coven of vile witches. Something wicked this way comes…

The Verdict: ‘Something is wrong…’ grandly proclaims Madame Blanc during the Grand Guignol climax of Suspiria. She’s not far off from the truth, as there’s something very off about this remake of Dario Argento’s revered 1977 giallo classic. Along with his other masterpiece, Deep Red, Suspiria is one of those horror films that is seemingly untouchable. And yet… here we have Luca Guadagnino, following up Call Me By Your Name, with his own audacious attempt to put a different spin on Argento and Dario Niccolodi’s original script. As he told Empire recently, Guadagnino fully intended it to be a polarising film. He certainly succeeded in that regard, as it veers wildly from stunning moments of stylised gore to clock-watching moments of outright boredom.

Whatever the polarising effect of the end result, you have to admire the sheer ballsiness of Guadagnino for taking it on in the first place. He sets his version of this witchy story apart from Argento’s original by setting it in the year of that film and moving the location to Berlin. That means he can add a political angle of civil unrest following terrorist hijackings and incidents, under the Baader-Meinhof banner. That atmosphere of unease runs throughout the film, so you can’t quite sit comfortably. With an extra hour to play with compared to the original, he also expands out the story by viewing events from another perspective – that of the troubled Dr. Josef and his lost wife (original star Jessica Harper, lending her seal of approval).

While that allows for a more intense viewing experience, the plot is drawn-out over six acts and an epilogue like an anaemic patient slowly dying. When the blood eventually flows, it’s a long-time coming and feels like a much-needed release. Rather than imitate a master director like Gus Van Sant did with his execrable, ego-massaging remake of Psycho, Guadagnino goes in his own direction. No larvae falling onto dinner tables. No Technicolor-embued nightmare sequences. Instead, the cinematography is suitably drab and full of those typically 70s muted browns, oranges and grays. He adds a red filter during the climax which works to hellish effect. On the casting front, Swinton heightens her performance with triple roles, two under heavy make-up. You know something otherworldly is going to happen when Swinton is involved.

Try as he may though, this reviewer couldn’t quite get behind this ambitious remake. When you add up the sum of its seven unlucky parts though, it’s ultimately a fascinating failure. There are certainly things to admire about this new Suspiria, but it’s nowhere near as good as Argento’s original. Even judged as an isolated film, it doesn’t really work. The plot is unfocused and downright baffling at times. It’s the very definition of polarising, true to Guadagnino’s word. That makes it an interesting watch all the same, at least for horror fans who had their machetes out for Guadagnino. At least it can be said that he tried valiantly.