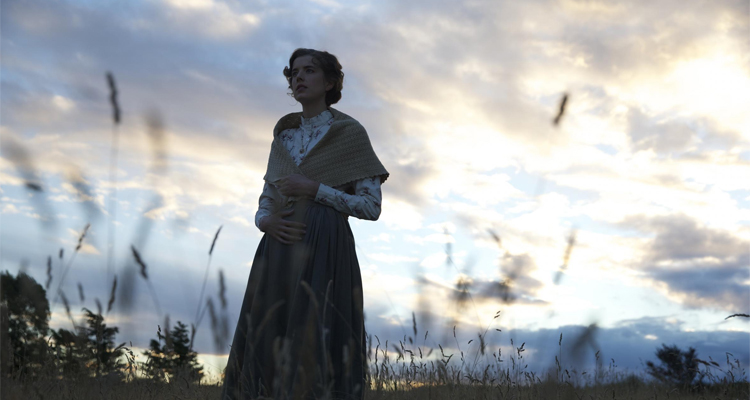 SUNSET SONG (UK|Luxembourg/16/135mins)
Directed by Terence Davies. Starring Agyness Deyn, Peter Mullan, Kevin Guthrie, Ian Pirie, Niall Greig Fulton
THE PLOT: Chris (Agyness Deyn) is a young woman living Scotland in the early 1900s. Talented at school, everything changes for her when her mother dies and her brother leaves home. It is up to Chris to make a life for herself, a better one than her mother lived.
THE VERDICT: Director Terence Davies has made acclaimed films throughout his career, including the recent film ‘The Deep Blue Sea’. In turning his hand to adapting Lewis Grassic Gibbons’ novel for the big screen however, Davies makes a film that is episodic, uneven, and where nothing really happens.
Agyness Deyn proved that she is a talented actress with last year’s ‘Electricity’, but she is woefully miscast in Sunset Song. Deyn tries her best, but seems to over act in every scene she is in – which is most of them – and she never truly bonds with the other actors on the screen, making this seem like a badly acted one woman show. Peter Mullan is on great form, as usual, as Chris’ abusive and controlling father. This is a strong performance, but a role that we have seen Mullan do before. Kevin Guthrie is sweet as Chris’ young suitor Ewan, but abruptly turns from sweetheart to monster in a matter of two or three scenes.
Terence Davies screenplay takes the narration from the book and plants it into the film, but since this is sporadic, the beautiful imagery it creates falls quickly away, and when the voiceover returns it feels jarring and laboured. The rest of the film feels episodic, as time passes as an uneven rate, characters go through abrupt changes, and the film feels like a collection of scenes, rather than a coherent story.
As director Davies does not pace the film well, in fact, there seems to be no urgency to the storytelling at all, making the story feel secondary to the admittedly beautiful cinematography. The performances are uneven in the film, and the entire affair is so badly edited that scenes seem to happen for no other reason than it says they should in the script.
In all, ‘Sunset Song’ is a dour affair; drawn out, badly paced and no real story to glue it together. Deyn tries her best to carry the film but seems to have been over directed as her hammy performance becomes entertaining for all the wrong reasons.
RATING: 1/5
Review by Brogen Hayes