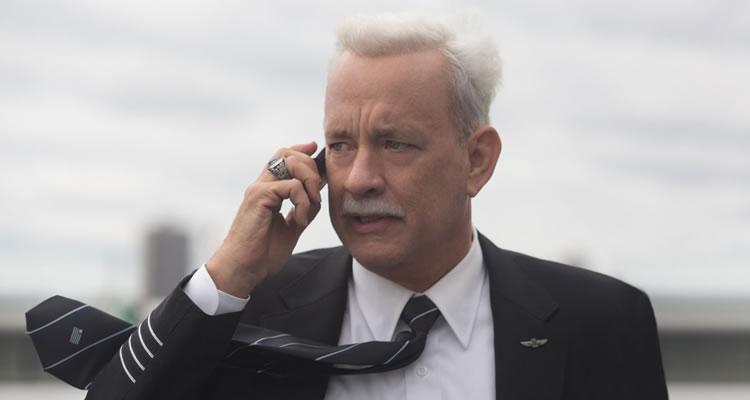 SULLY (USA/12A/96mins)
Directed by Clint Eastwood. Starring Tom Hanks, Aaron Eckhart, Valerie Mahaffey, Mike O’Malley, Anna Gunn
THE PLOT: Pilot Chelsey ‘Sully’ Sullenberger (Tom Hanks) makes an emergency landing on the Hudson Rover in New York after US Airways Flight 1549 suffers a catastrophic engine failure after a bird strike. Sully is praised as a hero by the public, but behind closed doors, an investigation implies that Sully made the wrong call in making an emergency landing in water, and Sully begins to struggle under the strain.
THE VERDICT: ‘Sully’ is based on a true story, and one that is still very fresh in the collective memories of the public. There is a lot more to the story than what was reported at the time of Sullenberger’s quick thinking, and Clint Eastwood’s film tries to tell the story in an unshowy and engaging way.
It should come as no surprise that Tom Hanks is the life and soul of ‘Sully’, and his understated and engaging performance carries the emotion and heart of the film. Hanks makes the character humble and sweet, but infuses Sullenberger with a layer of strength and determination, as well as a feeling of dignity that makes the audience root for him. Hanks is backed up by Aaron Eckhart as co-pilot Jeff Skiles, and while Eckhart allows Hanks to take the lead, he is also strong in his role, and supports Hanks incredibly well. The rest of the cast features Anna Gunn, Laura Linney, Mike O’Malley and Valerie Mahaffey.
Todd Komarnicki’s screenplay is based on Chelsey Sullenberger’s book “Highest Duty”, and tells the story of the crash on the Hudson through Sullenberger’s eyes. The screenplay is cleverly woven together, and does not follow the story thread that the audience might suspect; ‘Sully’ starts in the middle of the tale, and tells the story of the emergency landing only when it is needed and makes sense in terms of the story.
As director Clint Eastwood makes sure that the film is understated but engaging; there is nothing overly sweet or saccharine about the film, as it tries to tell Sully’s story in a realistic and subtle way. Eastwood gets strong performances from the cast, and is economical in telling the story; Eastwood keeps the story as brief as it needs to be, and doesn’t over dramatise the events and reactions in the film.
In all, ‘Sully’ is an economical and understated tale of bravery, while never trying to over dramatise the story or go over the top. Eastwood is strong as director, and makes Hanks the emotional heart and soul of the film. Things simply get a little drawn out toward the end of the film, which was always going to be problematic, but ends up feeling a little anti-climactic.
RATING: 4/5
Review by Brogen Hayes