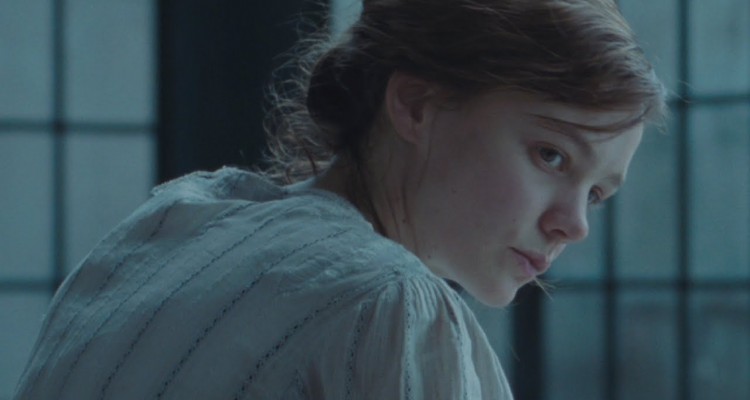 SUFFRAGETTE (UK | France/12A/106mins)
Directed by Sarah Gavron. Starring Carey Mulligan, Meryl Streep, Helena Bonham Carter, Anne Marie Duff, Brendan Gleeson, Ben Whishaw
THE PLOT: In London of 1912, Maud Watts (Carey Mulligan) finds herself drawn out of her quiet life with her husband and child, and into the struggle of the women campaigning for the vote, and in the process, loses everything.
THE VERDICT: The story of women struggling for universal suffrage is one that greatly effected the world that we live in today but, although Suffragette is well acted and produced, there are times when the audience can’t help but hanker for a more fluid film that would do this campaign justice.
Carey Mulligan is on fine form as Maud, a woman who finds herself drawn into the struggle, almost against her will, and loses everything in the process. Although she becomes oddly more gentrified as the film goes on, Mulligan carries the story ably and gives an unusually feisty and engaging performance. It’s great to see Helena Bonham Carter step away from the world of fantasy, and into a role of Edith Ellyn, a strong woman with the courage of her convictions, Anne Marie Duff as Violet is a force to be reckoned with and, although her presence lingers over the entire film, Meryl Streep is not really given a chance to be anything other than a cameo as Emmeline Pankhurst. Ben Wishaw does well as Maud’s husband Sonny, and Brendan Gleeson makes Inspector Arthur Steed a fully rounded and human character who upholds the law, even though he may not agree with it.
Screenwriter Abi Morgan, who previously brought us ‘Shame’ and ‘The Iron Lady’, seems to struggle slightly with the story for ‘Suffragette’. Telling the story through the eyes of an ordinary woman drawn into the struggle, rather than the known name of Emmeline Pankhurst, is a strong move, and one that works for the film. Watching the character’s entire life – her home, her son, her husband, her job – stripped away from her hammers home the sacrifices these women made for what they believed to be right, but the film struggles as soon as it widens its scope from Maud Watts into the rest of the cast. Emmeline Pankhurst appears only once, Helena Bonham Carter’s character becomes quickly radicalised and Anne Marie Duff’s character seems to give up too easily.
As director, Sarah Gavron – whose last film, the documentary ‘Village at the End of the World’ played at the London Film Festival in 2012 – struggles to put all of these worthy pieces together in an engaging and coherent manner. Important scenes seem to be just skimmed over, while smaller – and admittedly endearing scenes – are given too much prominence. It’s as though Gavron believed we know this story, but some parts needed to be hammered home hard. As well as this, the pacing is messy, making the film seem longer than it is, and the ending point seems to have been deliberately done so the film wraps up with a whimper, rather than a bang.
In all, ‘Suffragett’e takes an interesting angle on the issue of women’s suffrage in England, and focusing on a lesser known character gave the film space to examine the impact the campaign had on the poor and uneducated women who stood up for what was right. The performances are strong, but many of the characters are not given a chance to develop. This, combined with messy pacing, turns ‘Suffragette’ from a fascinating film into a mild curiosity.
Rating: 3/5
Review by Brogen Hayes