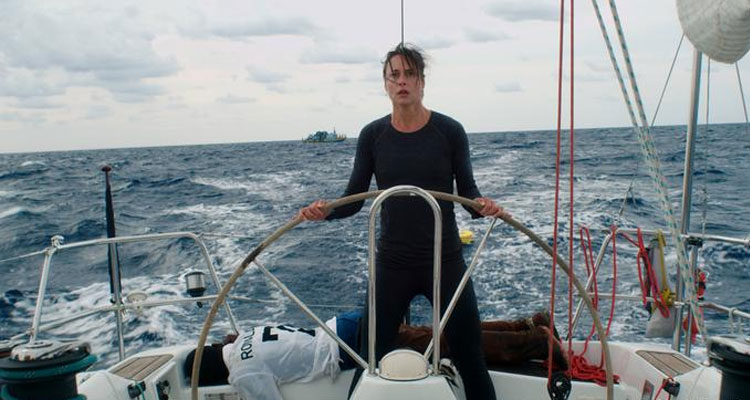 The Plot: German doctor Rike (Susanne Wolff) is on holidays in Gibraltar. She’s sailing her yacht to Ascension Island in the South Atlantic, where she intends to explore the lush forests. Setting out to sea by herself, she encounters a violent storm but makes it through… only to confront a moral dilemma. A nearby fishing trawler is in distress, with many people on the deck looking for help. She hails the coast guard, but he advises her not to intervene. Her yacht is too small and she could inflame the situation. While the rescue team is en route, she watches the trawler at a distance and waits. She must do something… but what?

The Verdict: In Greek mythology, the river Styx was the principal river that ran through the underworld, the crossing between the lands of the living and the dead. In Wolfgang Fischer’s film Styx, it becomes a metaphor for the high seas and the ongoing refugee crisis which has had tragic consequences for many families. In essence, Fischer boils the film down to the refugee crisis in miniature. One main character, one supporting character, two boats, the sea – that’s your lot. If it comes across as sparse and single-minded then that’s the intention of the director, who shows impressive restraint in only his second feature. Rather than go for high theatrics and drama, he instead goes for a sombre think piece about the limits of individual responsibility.

It takes a while for the film to get going, as it meanders at sea with seemingly no real plot thrust. During these long sequences, the film rests solely on the shoulders of Wolff. She remains an engaging screen presence though. With little backstory, she still manages to convey the peace and solitude of the ocean, while also hinting at the dangers that her character faces in going it alone in the watery wilderness. When the key plot point finally does kick in, the audience is very much in her shoes every step of the way. Told entirely from Rike’s point-of-view, we watch the situation go from bad to worse. As the hours tick away, she ponders whether an intervention is required, at a possible risk to her own life and the lives of the refugees.

Fischer could be accused of being cold and detached in his direction, since we only glimpse the refugee trawler at an indistinct distance and don’t quite know what’s going on. He’s inviting the audience to fill in the narrative blanks here. It’s a source of frustration for any viewer hoping for a more emotional, grab-at-your-heartstrings reaction. On the other hand though, there may be a method to this limited perspective. It forces the viewer into confronting Rike’s own dilemma and what the viewer might do – or not do – in these difficult circumstances. Sitting on a sofa watching from afar on a TV news report is rather different to being there, with human lives in your hands as time runs out.

Styx doesn’t offer any answers or solutions, so don’t expect a fully-rounded story here. What it does have though is an urgent sense of purpose, which rams home its point with a stark bite of reality. Given the detached style of filmmaking, it won’t be for everyone. It is thought-provoking enough to warrant a look though. It also acts as counter-programming to what is most likely going to be the biggest film of the year, which opens that same weekend. You have to admire the distributor’s confidence for that.